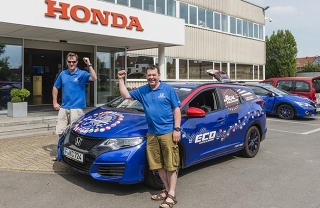 The carmaker has claimed the title for ‘Lowest fuel consumption – all 24 contiguous EU countries (all cars)’, recording an average 100.31 miles per gallon over 8,387 miles, in a 25-day drive across all 24 EU contiguous countries.

Behind the wheel of a Honda Civic Tourer 1.6 i-DTEC for the entire journey were two members of Honda’s European Research & Development (R&D) team, Fergal McGrath and Julian Warren, who were also responsible for last year’s MPG Marathon win along with team mates James Warren and Tony Shiggins.

For the Guinness World Records challenge, the team set out on their epic road trip from Aalst, Belgium, on 1 June, navigating the continent in a clockwise direction. They returned to their start point on 25 June, recording the incredible fuel economy figures which exceed the Tourer’s quoted efficiency of 74.3mpg by more than 25%.

The car achieved an average 932 miles on each tank of fuel, at a total fuel cost for the whole journey of just £459.

Fergal McGrath commented: “It was tough, but we really enjoyed it, and setting this new Guinness World Records title has made all of the hard work worthwhile. This was a huge team effort so I’d like to thank everyone involved for all of their commitment and support. After spending so much time behind the wheel Julian and I are just happy to be back behind our desks for a while!”

Leon Brannan, head of cars for Honda (UK), commented: "This is an incredible achievement and the team should all be very proud of the efforts that they have put in to set this new Guinness World Record. Driving the equivalent distance from their home in the UK to Australia in just 25 days is a huge challenge very few would take on. The fuel economy figures are remarkable – particularly when you consider that this is not a small car, but an estate with class-leading load space and vast practicality.”

Fergal McGrath added that he is looking to defend his title at this year’s MPG Marathon. Last year’s two-day event saw the Honda team expertly guide a Civic Tourer 1.6 i-DTEC around the specially designated 330-mile route, recording an outstanding 97.92mpg.