Drivers will now be encouraged to actually throw litter from their cars as the first new ‘funnel bins’ are set to be installed next week. 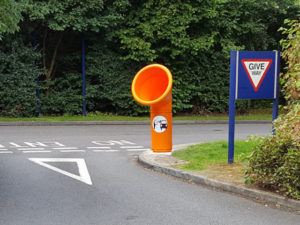 Launching first in Lymm Services on the M6, the bins are at vehicle window height to enable drivers to throw their litter in, with both car and HGV versions available.

A 10-week trial held at the Winchester service area on the M3 last year found installation of the bins reduced litter by 25%.

Earlier this year, the government said it was looking at plans to fine vehicle owners if it could be proved that litter was thrown from their car – even if it was discarded by somebody else’s.