Highways England has announced two contracts worth £285m to upgrade the concrete surface of roads across the country. 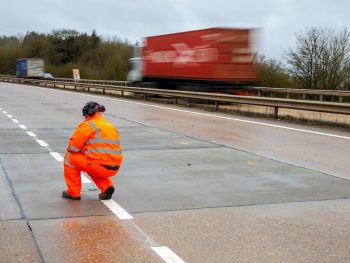 Over the next five years, Highways England will work with engineering and construction companies Morgan Sindall Infrastructure, John Sisk & Son, VolkerFitzpatrick, Colas, Dyer & Butler and Tarmac on a long-term programme to repair or replace the concrete surface of motorways or major A-roads in England.

The programme is part of Highways England’s nationwide drive to revitalise concrete roads in England, which will invest up to £400m over the next five years to 2025.

Concrete roads make up almost 400 miles (4%) of England’s motorway and major A-road network, and are mostly found along the eastern side of the country, in the North East, Yorkshire, East Anglia and the South East. They’re said to have provided years of virtually maintenance-free life but are now in need of vital upgrades.

Martin Fellows, Highways England Regional Director, said: “This is the biggest concrete road renewals programme we have ever embarked on and we’re pleased to have awarded the final two contracts that will help us deliver the maximum benefits of safe, reliable and smooth journeys for many years to come.”