Kwik Fit is marking the 50th anniversary of its first centre opening with an offer for discounted MOTs. 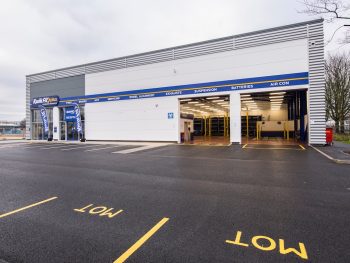 Its first centre started in Edinburgh in 1971 and to mark its half century, the company is offering all its Class 4 MOTs (cars and vans) throughout April for the price of £19.71. This could save drivers up to £39 on their test, based on the maximum government test fee of £58.75.

Data released last week by Kwik Fit revealed that the number of drivers missing their MOT expiry date by more than three weeks has tripled in the last six months, compared to the equivalent period the previous year.

One in 11 drivers (9%) booking their MOT test in the last half year only did so three or more weeks after their current MOT had run out. This compares with a figure of just 3% in the whole of 2019.

Conversely, Kwik Fit has also seen a rise in some drivers booking ahead of their MOT; the number of drivers booking their test five or more weeks in advance of their expiry date also tripled.

Both changes are believed to be the result of the introduction of six-month MOT extensions in the early stages of the first lockdown, which has not only changed the time of year when drivers need to get their car MOTed, but also seen the booking pattern become much more spread out.

Roger Griggs, communications director at Kwik Fit, said: “There has been a lot of upheaval in the MOT system in the last 12 months, so we would encourage drivers to check their expiry date to ensure it’s still valid.  And even if there are some months left, with lockdown restrictions easing and drivers starting to travel increased distances, owners may want to consider getting their vehicles tested if they have not been used much over the last year.”

Kwik Fit has also expanded its online booking service, enabling drivers to select their most convenient centre at a time to suit them.