Tributes have been paid to Brian Johnson, the chairman and founder of The Grosvenor Group and a “trailblazer in the automotive sector”, who has died aged 74. 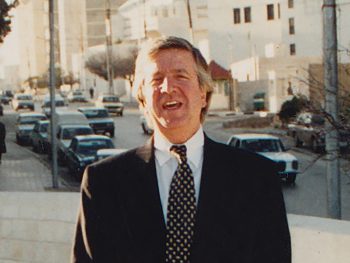 He passed away peacefully with his family around him at The Wellington Hospital, London on 18 February.

Johnson’s involvement in the automotive sector stretches back to 1967 when he became a salesman for Croyland Motors in Wellingborough.

Following a time as managing director of Reliance Leasing, he went on to establish Grosvenor Leasing in 1981, credited as the largest privately owned contract hire and fleet management company in the UK.

Since then, acquisitions of automotive companies led to the development of The Grosvenor Group, which is now recognised for brands such as Interactive Fleet Management, York Ward and Rowlatt, and Croyland Car Megastore.

Shaun Barritt, the Grosvenor Group’s CEO, said: “For those of you who knew Brian, he was an innovator and a trailblazer in the automotive sector. He launched a number of industry firsts, perhaps the best-known being the retailing of ex-contract hire vehicles direct to the public rather than processing all ex-hires through the auction houses – something that many other leasing companies said couldn’t be done, but however very shortly after adopted.

“Brian led by example, never asking his staff to do anything that he would not do himself, no matter how menial the task. He was a true mentor who inspired others to achieve both their personal and business aspirations.”

The BVRLA has also paid tribute to Brian Johnson, with The Grosvenor Group having been a member of the association since 1997.

Chief executive Gerry Keaney said: “On behalf of the BVRLA, I would like to extend our sympathy and thoughts to Brian’s family, friends and colleagues.

“I’d also like to acknowledge his immense contribution as one of the founding fathers of the vehicle leasing industry who paved the way for the successful, innovative sector we see today.”

His son and daughter added that the business was a huge part of his life and that they are dedicated to continuing this legacy in his memory.