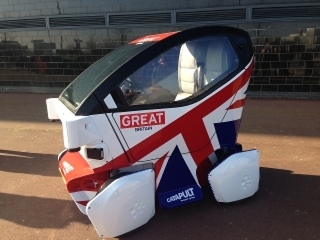 The measures – announced by Business Secretary Sajid Javid and Transport Minister Andrew Jones – are intended to put the UK at the forefront of the intelligent mobility market, expected to be worth £900bn by 2025.

Business Secretary Sajid Javid said: “To boost productivity Britain will need to capitalise on new technologies like driverless vehicles, securing high skilled jobs for those who want to work hard and get on, and contributing to a more prosperous future for the whole of the country.

“Our world-beating automotive industry, strengths in innovation and light touch regulatory approach to testing driverless technology combine to make the UK market competitive and an attractive destination for investors.”

The project will see bidders put forward proposals in areas such as safety, reliability, how vehicles can communicate with each other and the environment around them and how driverless vehicles can help give an ageing population greater independence.

Successful bidders will need to match the £20m funding from the Government – which forms part of the £100m for research into intelligent mobility announced by the Chancellor in the Spring 2015 Budget – with their own money.

The project also sees the establishment of a code of practice to provide the industry with framework in order to safety trial cars and create more sophisticated versions of models that already exist. A new joint policy unit, the Centre for Connected and Autonomous Vehicles (C-CAV), will co-ordinate government policy on driverless cars and connected technology.

Professor Nick Reed, technical lead of the GATEWay project & academy director at TRL, said: "Much research and development is required before driverless cars become commonplace on our streets, but the launch of the Code of Practice brings this vision a step closer. It sets the scene for the safe evaluation and development of highly and fully automated vehicles for years to come and is another example of how the UK is leading the charge in this area. Combined with the £20m funding and the launch of theCentre for Connected and Autonomous Vehicles, the UK is now firmly positioned at the centre of future mobility.

"Since the press launch of the GATEway project in February, the TRL-led consortium has been working hard to lay the necessary foundations for the planned autonomous vehicle trials. We want to make sure that the trials are optimally developed and delivered, so the first public vehicle trials won’t take place until 2016. But now that the new Code of Practice has given the green light for testing on UK roads, it won’t be long before you see one of our self-driving vehicles out in the public again.”