By Jonathan Musk / 5 months ago / Latest News / No Comments

The 90th Geneva International Motor Show (GIMS) set to start next week has been cancelled with immediate effect following a ruling by the Swiss government to ban gatherings of more than 1,000 people. 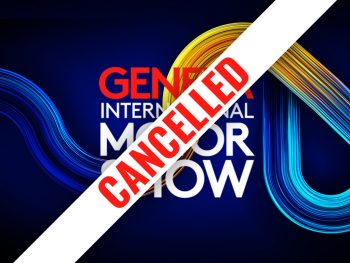 The 2020 Geneva Motor Show has been cancelled

The ban comes into force with immediate effect and will last until at least 15 March 2020. It is the Swiss government’s response to the ongoing COVID-19 (more commonly known as a strain of Coronavirus) virus that has been spreading throughout Europe, with the first recorded incident in Switzerland two days ago.

The Geneva show was set to debut cars from the world over, including +900 new cars of which around 150 world and European premieres and attracting 600 thousand visitors over the course of the show.

A statement following an extraordinary meeting held today, 28 February, by the Swiss government’s Federal Council reads, “The Federal Council’s top priority is to protect the population. It is responding to the latest developments in the coronavirus epidemic and has categorised the situation in Switzerland as ‘special’ in terms of the Epidemics Act.”

Maurice Turrettini, chairman of the foundation board for the show, commented on the decision: “We regret this situation, but the health of all participants is our and our exhibitors’ top priority. This is a case of force majeure and a tremendous loss for the manufacturers who have invested massively in their presence in Geneva. However, we are convinced that they will understand this decision.”

Since the cancellation announcement, organisers have added that they are looking into the possibility of rescheduling the event for this year, but that the 2021 event is provisionally scheduled for 14 March 2021. When asked if the entire concept of the motor show has come into question, the organisers replied that they did not believe so, on the strength of the number of exhibitors that had booked for this year. There is no word as yet whether manufacturers have offered their support for future shows.

Exhibitors had already started to pull out from the show, including Chinese automotive brand Aiways. Other marques set to show cars included the new Fiat 500 electric and new Volkswagen Golf GTD, plus Audi A3, and premieres of the new Kia Sorento and restyled Mercedes-Benz E-Class to name but a few.

The news follows the cancellation of other major global events, including Mobile World Congress (MWC) that was set to run from 24-27 February and cancelled for similar anti-outbreak reasons.