The Tarraco proves a favourite with kids and adults alike, says Natalie Middleton. 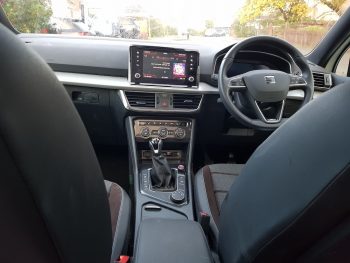 My seven-year-old made me laugh the other week when he said he’d love it if the Tarraco was turned into a house and he could live in it. He was primarily talking about the ambient lighting, the wealth of chrome detailing and leather, and all the gadgetry on board (I’ve got visions of his future bachelor pad) but he has a point; the Tarraco is a great place to spend time – which we have been of late.

I’ve noticed from the start just how comfy the Tarraco’s seats are, helped by standard lumbar adjustment. Buttons on the dash are well organised and although the infotainment system brings has extensive features, it doesn’t stop you from being able to access urgent buttons like demisters on the move. However, my husband’s not happy with the size of the instant speedo read-out – which features inside the digital speedo as part of the dash.

There’s plenty of space – ours may have a panoramic roof (great for keeping the kids entertained in a jam on the M25 by Heathrow) but it doesn’t impact on head room. Cubbies are many and varied, including at the sides of the boot, which enables me to house a fair amount of stuff despite keeping the rear seats permanently up; a godsend now my eldest has started secondary school and the Tarraco has been pressed into a rainy weather taxi service. The levers in the boot to fold the middle-row seats back are proving handy while the 40/20/40 split is a benefit if you need to transport long items while still carrying passengers.