The latest car to join Fleet World’s long- term fleet is the Vauxhall Combo Life. Curtis Hutchinson gets behind the wheel. 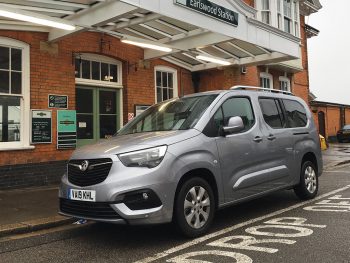 With the Zafira Tourer discontinued last year, this supersize XL version serves as a replacement of sorts for those in need of a seven-seater.

The Combo Life is an exercise in expediency. Using an existing van platform, it fills the MPV gap in Vauxhall’s line-up in the most cost-effective way possible. The result may not be pleasing on the eye but there’s no arguing with its delivery of space; its main selling point.

The possibilities here are impressive. Behind the third row there’s 806 litres of luggage space, which can be significantly boosted by dropping the rear seats or removing them altogether, which is exactly what we did when moving some bulky furniture.

On the road there’s no mistaking the Combo Life’s lineage as a commercial workhorse. Yet the seats are comfortable, driver visibility is good and outside noise is reasonably muted.

In the cut and thrust of everyday traffic demands, the 100hp output from the 1.5- litre turbo diesel engine is adequate. But when immediate acceleration is needed, especially when joining a motorway from a slip road, the unit feels woefully under-powered. However, it is proving to be economical, averaging 48.6mpg.

As a fleet proposition, Vauxhall believes the Combo Life has user-chooser and Motability appeal. It should also attract the interest of taxi companies and chauffeur fleets, so over the coming months we’ll find out exactly how the Combo Life shapes up as a company car contender.