I feel like I’ve hit the jackpot with Fleet World’s new Mazda3 long termer – a feeling I’m sure is going to continue during its six months with us. 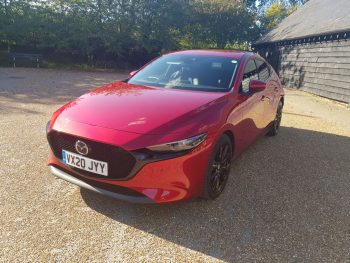 As well as the new Skyactiv-X engine, the latest 3 has introduced a range of top-notch equipment

It’s the first time I’ve got behind the wheel of the fourth-generation 3, which launched two years ago. Already, I can’t help but feel I’m in a much more premium car, thanks to its impactful exterior design, standard kit such as head-up display and the abundance of black leather, including the stitched dash. We also opted for the Soul Red Crystal metallic paint (£790); by far the most striking colour.

Our is the hatchback version – which is 200mm shorter than the saloon and only shares the windscreen and bonnet with its sibling. It’s got 358 litres of boot space up for grabs (including the space under the boot floor), rising to 1,026 litres with the seats down.

Under the bonnet is the 180hp 2.0-litre four-cylinder Skyactiv-X engine introduced a year ago and using both compression ignition and spark ignition (Spark Controlled Compression Ignition – SPCCI – technology) to offer the performance of a petrol but with diesel-like fuel economy and emissions. Official economy figures stand at 48.7mpg and 131g/km while the 0-62mph sprint is taken care of in 8.3 seconds and the 3 Skyactiv-X has a top speed of 134mph.

It’s been three long years since the technology was first announced so it’s great to get the chance to test it first-hand; more next issue.

As well as the new engine, the latest 3 has introduced a range of top-notch equipment, including the aforementioned windscreen-projecting colour head-up display with Traffic Sign Recognition, Mazda radar cruise control and LED headlights. All of which are standard across the range.

For me, it’s the first car I’ve had with a heated steering wheel; something I’m disproportionately excited about and part of our GT Sport trim along with Bose audio; pampering both my hands and my ears in the coming months.