In his final report on the CX-5, Craig Thomas reports on an excellent performance by Mazda’s dealership. 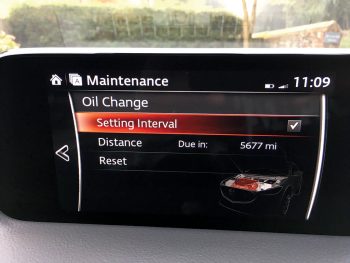 While the software had been updated, the oil level was at the previous higher level, hence the messages

This month, I have mostly been baffled by error messages flashing up in the instrument panel.

The first was that the oil needed changing, baffling because the CX-5 had been serviced 3,000 miles ago, so it shouldn’t need another oil change so soon. I suspected a sensor error was more likely than the car actually needing another oil change, but resolved to speak to Mazda.

However, before I could do that, there was another error message, alternating every few seconds with the oil change message: the engine oil level was too high – which was even more baffling. A low level was possible, but why was the oil level suddenly too high, as I’d not added any. A quick check of the dipstick confirmed my suspicions that this was another sensor error.

But I booked the car into Croydon Mazda to get checked over and the source of the problem was located. The oil has indeed been changed at the first service, alongside an engine management software update, which set a lower oil level, a tweak by Mazda. But while the software had been updated, the oil level was at the previous higher level, hence the messages.

An interesting learning experience, resolved in a few hours at an efficient and courteous dealership.