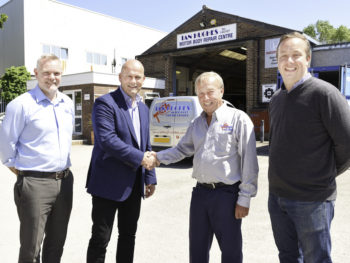 It follows last summer’s announcement that Fix Auto had taken a majority share in existing franchisee Fix Auto Goole and more recently that it had bought Daventry Panel Craft, transforming it into Fix Auto Daventry.

Under the latest acquisition, the organisation has purchased Ian Hughes Motor Body Repair Centre in Colwyn Bay, North Wales, from previous owner Ian Hughes, who is retiring from the industry after establishing the business over the last 30 years. Hughes’ son Simon will stay with the operation and will be take on the role of general manager going forward. The 15,400 sq. ft bodyshop will now transition into Fix Auto Colwyn Bay.

Ian Pugh of Fix Auto UK said: “Establishing Fix Auto Colwyn Bay is the next development in our strategy to create scale in a mature market, either by organic growth with new franchisees, or via acquisition. We are now in the process of rebranding the repair centre and investing in the latest equipment to maximise efficiency. Once this is complete, the site will officially become Fix Auto Colwyn Bay. I wish Ian all the best in his well-earned retirement and look forward to working with Simon and the team, as part of our family.”

Previous: Fleets urged to be part of ‘Plastic Free July’
Next: EU car registrations down 3.1% in first half