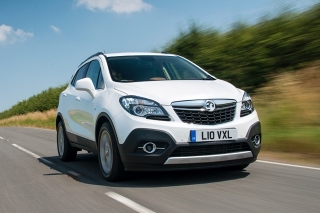 Vauxhall was an early arrival in the compact crossover segment, and the Mokka has been an important part of broadening its appeal with user-choosers since. That’s something a new and more competitive diesel engine can only build on.

It’s the same 1.6-litre ‘Whisper Diesel’ engine that Vauxhall has steadily been rolling out across the range over the last 18 months. The Mokka gets the more powerful of the two outputs – at 134bhp – and it’ll supersede the ageing 128bhp 1.7-litre CDTi as Euro 6 emissions limits come into force this year. In the meantime, both engines are available,­­­ but with a tiny £180 price walk to the newcomer.

For company car drivers, the new engine is a no-brainer. Vauxhall’s pricing on the Mokka is aggressive, but CO2 emissions of 120g/km were starting to show its age against an ever-wider choice of competitors. At 109g/km with a manual gearbox and two-wheel drive, it’s competitive on running costs and good value too – especially in the Tech Line trim. However, that headline figure does require downsizing to 17-inch wheels – the 18-inch versions fitted as standard bump it up to 114g/km.

Financial advantages aside, it’s also a much nicer car to drive. It’s still grumbly under load, but there’s a marked reduction in noise, vibration and harshness compared to its predecessor, which makes the Mokka feel more like a
C-segment hatchback than an scaled-up supermini, and the relatively high power output means it’s long-legged enough for motorway use.

If there’s any criticism to make, it’s that the model range could be wider. Vauxhall has a 108bhp version of this engine in the Astra, bringing the same refinement benefits but with the added advantage of an even lower entry price and a reduction in CO2. Given that most of this car’s rivals are between 110 and 120bhp, that could’ve made the Mokka even better value.