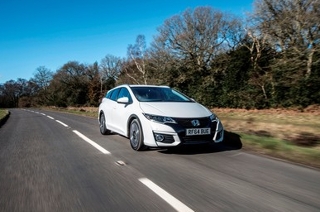 The title attempt will see two members of Honda's European Research & Development (R&D) team climb into a Honda Civic Tourer and set out from Aalst, Belgium on 1 June.

Heading towards the Netherlands and Germany, their trip will see them navigate the Continent in a clockwise direction, with the aim of returning to their starting point some 25 days later, on 25 June, having covered a planned total of 13,614km.

The attempt for the 'Lowest Fuel Consumption – all 24 contiguous EU countries' title comes on the back of several independent tests which have proven Honda's 1.6 i-DTEC engine to consistently out-perform its quoted fuel efficiency in real-world driving conditions.

Honda R&D colleagues of some 18 years, Fergal McGrath and Julian Warren, based at Honda's European manufacturing facility in Swindon, UK, have volunteered to take up the challenge and will be charged with driving an average 370 miles, taking around 7.5 hours each day.

Fergal McGrath commented: "We are very much looking forward to the record attempt, and while we're excited we're both a little nervous about the scale of the task that awaits us. A huge amount of planning has gone into taking on this challenge and we look forward to what we hope will be a successful result when we return to Brussels on 25 June. But we've got more than 170 hours behind the wheel to contend with first!"

Follow Honda's record attempt and get involved at #RealFuelChallenge.