By Martyn Collins / 1 year ago / Features / No Comments

With more manufacturers offering inhouse telematics systems, Martyn Collins looks at what the future holds for the wider telematics market and how it will affect fleet operators. 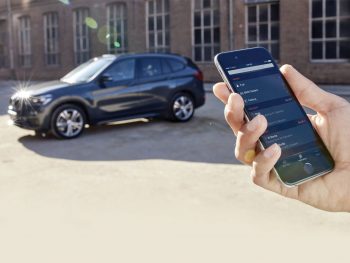 ConnectedDrive, the intelligent connectivity system, has been fitted to BMW models for over 20 years.

According to the latest Business Wire report on The Global OEM Telematics Market, it is estimated that over 41% of all new cars sold in 2018 were equipped with an OEM (original equipment manufacturer) embedded telematics system – up from 33% in 2017.

The main advantage of OEM telematics data is the ability to connect a vehicle ‘over-the-air’ without the logistics of aftermarket fitment. However, there is still a wide diversity in sensor data and capabilities across different OEM telematics systems, and challenges around the availability of data as well as the standardisation of data protocols across makes and models.

Furthermore, with OEM systems initially built to serve consumers with apps and health reports, they often lack enough data, frequency of sampling or precision to deliver many of the solutions fleets require. For example, crash and damage management, a big driver of savings for fleets, requires granular GPS and accelerometer data, which today is not easily available except through aftermarket solutions. The ability to deploy an aftermarket sensor is therefore important in many cases to address any gaps in a specific OEM telematics system.

One of the key OEM innovators has been the BMW Group, who have included intelligent connectivity in their models for over 20 years via their ConnectedDrive system. Starting back in 1998, the BMW Assist package was released under the heading of ‘BMW Telematics’, which included Concierge Services, up-to-date traffic information and Intelligent Emergency Call. With the first built-in SIM card fitted to cars in 2004, customers were able to access news, weather and office functions on the move via BMW Online. A web browser was fitted in the 7 Series, followed by the launch of the ConnectedDrive store in 2014, where customers could book and pay for services such as Real Time Traffic Information and Online Entertainment products – directly from their car – with future innovations including geofencing functions for the electric range of eDrive models.

BMW aren’t alone, Ford also has its own telematics service, ‘Ford Telematics’, available to commercial vehicle customers via its Ford Commercial Solutions (FCS) unit. Information from these vehicles can be collected and viewed via the Ford Telematics application, a web-based portal. Mercedes-Benz also has its Connect Business system, which can provide real-time data on individual vehicles, for monitoring and maintenance or to provide a digital driver’s log. Other major car brands offering embedded telematics, or with systems incoming, include FCA Group, Hyundai, Jaguar Land Rover, PSA, Renault, Tesla, Toyota/Lexus and Volkswagen.

OEM telematics for cars and commercials has been a long time coming, according to aftermarket suppliers. Already popular in the haulage industry – Volvo, Scania and others have had their own systems for a decade or more – and yet products from independent telematics service providers seem more popular across the board.

In fact, vehicle tracking suppliers have been expecting a window of opportunity for their products, lasting five years since the early noughties! But, the availability of OEM telematics systems won’t just affect the suppliers, there’s the fleet managers too, who have been managing their fleets for decades – firstly without telematics and, later, using dedicated third-party systems. CEO of Simplytrak, Andrew Johnson says: “The main advantage of OEM is that it can include engine management information not easily available to third parties. The flipside is that OEM will always trail third-party systems with the amount of functionality made available to fleet managers.”

What about mixed fleets?

Then there is the issue of mixed fleets to consider, which make up most of the fleet industry. How many telematics systems would a fleet manager be expected to use? Each would have its own functions and interfaces; each would have its information displayed differently. This is where the aftermarket comes into its own, with dedicated providers, who have spent many years developing cutting-edge systems that are constantly updated with new features and continue to do so. Simplytrak’s Andrew Johnson (left) says: “Aftermarket systems are nimbler, and cloud-based, providing information for one main customer – the fleet manager. Our system is feature-rich and gives control to the person running the fleet. It would be hard to imagine giving that up to use a few different systems that do not work together running different parts of your operations.”

There’s also the data collected by these OEM systems to consider. Although a step in the right direction and bringing usable data to the end-user, access is in its early days and only across specifics of the available telemetry. Plus is there enough trust in the data presented? Consensus from the aftermarket manufacturers is that there isn’t, following manufacturer scandals such as Dieselgate.

“There are also no standards around what OEM telemetry should look like, or how it should be delivered, and historically manufacturers have been very protective about performance data and the sharing of it,” Johnson adds.

So, maybe the best solution would be to work with the OEMs, rather than alongside them? One such example is Webfleet Solutions. The idea of their OEM.connect programme is to establish more partnerships and work actively together. Paul Verheijen (right), VP product management, says: “By working with us, vehicle manufacturers are able to benefit from our far-reaching experience and expertise in the fleet management space, which can help them to unlock the considerable potential for the end-user.”

Mark Stamper (left), group managing director of Camera Telematics, is also keen for his company to work with OEM platforms. He says: “As a vehicle camera supplier to the aftermarket, we would welcome the opportunity to integrate our data into OEM platforms, as well as aftermarket platforms.”

As a hardware supplier, it isn’t Camera Telematics’ intention to pull together OEM data. However, Stamper admits the company is seeing more platforms managing big data and delivering it in a more actionable, data-set form.

IMS, the recently re-branded Trak Global automotive OEM telematics systems provider, offer another solution to the issue of mixed fleets. Their DriverSync platform can manage all underlying sources of data, for fleet operators, plus governments and even insurers. This data-source agnostic approach means their customers can use a mix of telematics sensors and helps overcome the challenges within multi-brand fleets. For example, one vehicle in the fleet can use automotive OEM data, whilst another uses an aftermarket sensor, and a third might use both OEM data and aftermarket data, with all vehicles managed using the same, consistent solution and experience.

Leon Hurst (right), CEO mobility division, says: “Our customers benefit from this approach as it supports heterogeneous data sources across the fleet, whilst also transcending both changes between vehicle makes, models, and years, and inevitable data-source revisions and updates.”

Rather than fearing OEM telematics systems, the aftermarket industry, it would seem, sees these factory systems as a way of keeping them on their toes, pushing technology and data management to the next level of connectivity. Should fleet telematics providers be worried? According to our research, maybe, but the consensus is that they shouldn’t be. The key differentiator will be when fleet managers are able to view fleet data from several different sources, such as for example, the Trak Global DriverSync platform.

So, will these changes with OEM telematics services make it more difficult for fleets wanting aftermarket services? Much will depend on how manufacturers with OEM systems lock down available information from CanBus, OBD and others. All of which will slow down the rate of development on aftermarket competition.

Then again, such OEM telematics might well be more focused and developed with service centres and manufacturers in mind, over the needs of the fleet manager.

Andrew Johnson, of SimplyTrak, sums it up best by saying: “There is no reason for both OEM and aftermarket telematics not to run side by side as they do now and have done for a decade or more.”