Vauxhall’s revised Insignia will bring an all-new engine family when it goes on sale next month, with emissions starting from 100g/km as it also introduces a new top-of-the-range GSi model. 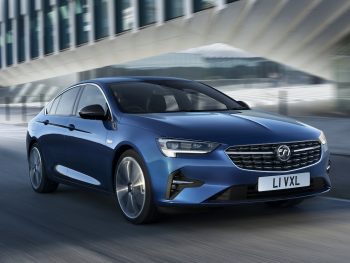 Offering up to an 18% reduction in fuel consumption compared to before, the new Insignia engine range features three- and four-cylinder units, beginning with a 1.4-litre (145hp) petrol engine and a 1.5-litre (122hp) diesel, both three-cylinder and up to 50kg lighter than their predecessors.

Next up, there’s two 2.0-litre petrol engines with 200hp and 230hp – the first Vauxhall engines with cylinder deactivation – as well as a 2.0-litre four-cylinder diesel, which will be introduced later this year.

The 230hp petrol will form the basis of the new flagship Insignia GSi, which also comes with four-wheel drive with torque vectoring, said to be unique to its segment, plus a new nine-speed automatic transmission with steering wheel-mounted paddle shifts. It also features standard mechatronic FlexRide suspension, which adapts shock absorbers and steering in fractions of a second, and a bespoke ‘Competition’ driving mode.

Other new features for the updated Insignia include next-generation IntelliLux LED headlights, which now feature 84 LED bulbs in each headlight, instead of the previous 16, to provide faster reactions. The new headlights are also more powerful while requiring less energy.

The latest Insignia also gets a new rear-view camera, part of a range of driver assistance technology.

For driver convenience, infotainment options are compatible with both Apple CarPlay and Android Auto, from the basic seven-inch colour touchscreen Multimedia Radio to the Multimedia Navi Pro unit. The top-of-the-line version features an eight-inch touchscreen and a number of Connected Navigation services.

The updated Insignia is available to order from next month.