A survey has found motorists believe new legislation should be drawn up to tackle the increased number of cyclists and the rise of electric-assist bikes on UK roads. 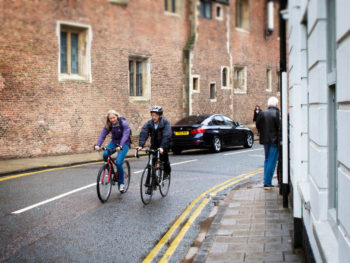 78% of those surveyed also observed cyclists as not obeying the rules of the road, such as not stopping for red lights or zebra crossings

Over two-thirds (69%) of respondents said new cyclist legislation should include bikes having a registration number to make them identifiable, and more than half (53%) said cyclists should be required to hold a licence to ride on the road.

In addition, 44% of drivers thought cyclists should pay vehicle excise duty, and all push and electric bikes should have an annual safety test, like an MOT (59%).

Concerns were also raised over cyclists’ safety, with 76% of drivers surveyed saying they felt helmets should be a legal requirement for cyclists. Likewise, 60% of drivers felt that there are too many cyclists riding on fast roads that are unsuitable for them.

Ben Wooltorton, chief operating officer of InsuretheGap.com said: “The explosion in bike usage in recent years is good news for the environment and should also help ease congestion in urban areas if managed correctly. However, our survey picked up a definite feeling among motorists that they are often held to higher standards than their fellow road users when it comes to adherence of the highway code”.

78% of those surveyed also observed cyclists as not obeying the rules of the road, such as not stopping for red lights or zebra crossings.

Wooltorton continued: “Roads, particularly in towns, are increasingly being used as ‘shared spaces’ and it’s important that legislation, infrastructure planning and funding takes into account the views, requirements and safety of all road users, otherwise this tension between different groups is almost inevitable. Our survey also particularly highlighted that motorists are concerned about road funding, safety and also insurance which isn’t currently compulsory for cyclists, unlike most other road users.”

The survey asked 2,000 UK drivers and was commissioned by InsuretheGap.com.