Volvo has unveiled its third-generation S60, which will provide it with a vital tool to expand in the US and Chinese sedan markets while ditching diesel from the range. 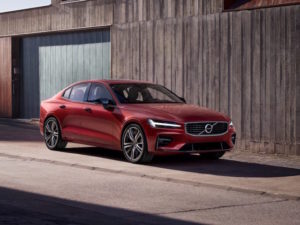 Unveiled at the company’s first US manufacturing plant in Charleston, South Carolina – and marked out as the first Volvo car made in the US – the S60 is based on the same ‘SPA’ architecture as models including the new V60, XC60 and the 90-series cars.

It also brings technology from the 90-series and other 60-series cars into this segment. Driver assistance features include the City Safety system with Autobrake technology, which recognises pedestrians, cyclists and large animals and automatically brakes to mitigate oncoming collisions.

It also comes with the optional Pilot Assist system – which supports the driver with steering, acceleration and braking and now features improved cornering performance. The S60 also includes Run-off Road Mitigation, Oncoming Lane Mitigation and other steering assistance systems, along with the optional Cross Traffic Alert with autobrake.

As announced a month ago, the new S60 also becomes the first Volvo car to be sold without a diesel engine. Instead, it will offer Volvo’s T5 and T6 petrol engines in selected markets as well as Volvo’s T6 Twin Engine AWD plug-in hybrid that generates a combined 335bhp, and the T8 Twin Engine AWD plug-in hybrid with 395bhp. The latter can also be boosted up to 409bhp with the help of a performance handling upgrade developed by Volvo Cars’ electric performance arm, Polestar.

Prices have not been announced but customers in certain European markets  – including the UK – and the US will also be able to drive the S60 via the carmaker’s ‘Care by Volvo’ flat-fee subscription service.