Audi’s second generation A1 drops diesel from the line-up following a completely new redesign, including many features from its larger siblings. 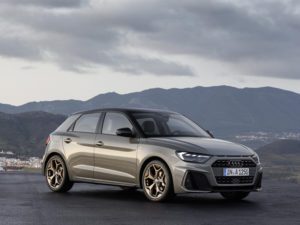 Dropping diesel from the range, a choice of TFSI petrol engines range from 94 to 197bhp – each with turbo, direct injection and a particulate filter as standard and a choice of manual or seven-speed S tronic dual-clutch transmission. Three engines will initially be available including the 30 TFSI (1.0-litre, 3-cyl, 114bhp), a 35 TFSI (1.5-litre, 4-cyl, 148bhp) with cylinder deactivation (COD) and a range topping 2.0-litre 197bhp performance variant. These will be followed by a 25 TFSI with 94bhp shortly after launch.

The cabin is said to be more spacious and has had a modest increase in boot capacity. The big change is the new 10.25-inch infotainment display and a multifunction steering wheel as standard, with Audi virtual cockpit an option. The MMI radio plus is standard for UK cars and has been inherited from larger Audi. Audi smartphone integration is standard too, enabling iOS and Android connection for Apple CarPlay and Android Auto.

Lane departure warning and Audi pre sense front are both standard, helping alert the driver to keep within a lane and avoid pedestrians and cyclists. Adaptive cruise control is optional.

The new car will be available exclusively as a five-door hatch (Sportback) and with SE, Sport and S line trim specifications.

As with its predecessor, customisation plays an important role and can be specified with ten colours and a wide variety of wheels, LED lights and even bronze details inside and out.

The new car has grown by 56mm pushing its length to just over four metres (4.03m), while its width remains almost the same at 1.74m.

The new A1 will be available to order from September, with first deliveries in November for UK customers.