Czeching In: An interview with Škoda UK director Rod McLeod

By Craig Thomas / 2 years ago / Interview, Opinions / No Comments

Škoda UK director Rod McLeod talks to Craig Thomas about how the Czech brand is evolving, its fleet offering and its plans for the future. 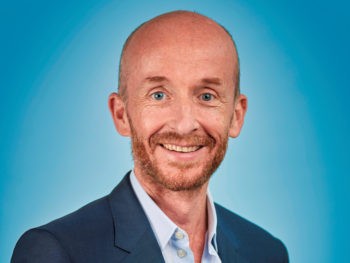 Škoda is one brand that feels very much at ease with itself: in addition to the practicality and reliability that have become associated with the company’s models in recent years, there’s a new sense of confidence to their styling that, when allied to higher-quality interiors, is helping to make them more desirable to new customers, including those in the fleet sector.

The future looks bright, too, if recent concept cars are any guide. The recent Vision E, Vision X and Vision RS cars (the latter seemingly a hint of the Golf-sized Scala hatch) suggest that the future product direction of the company is bright.

New UK director Rod McLeod, who took the reins to the company in February of this year, joins at a time of significant growth: sales have increased from 53,249 in 2012 to 80,056 in 2017. Taking the hot seat at a time of such success must place a lot of pressure on an executive, but when McLeod sat down with Fleet World recently, at the launch of the revised Fabia, he seemed confident that the reasons underpinning Škoda’s growth were sound.

“I think the growth’s been based around three things,” he explained. “One is the great products and we’ve had the two new SUVs coming through in the form of Kodiaq and Karoq. Then there have been great reviews and how they’ve been perceived really well by customers as well. So what we’re getting with those cars is new customers to the brand, which are really critically for growth, at the end of the day.”

However, this growth has been attained with a carefully formulated strategy that has included a reappraisal of fleet and where the company has focused its attention within the sector, as McLeod told us: “In terms of rental and Motability, we’re actually back year on year, but that’s been a conscious decision. But, in true fleet, one of the great things about Skoda now is that the product credibility is really there. And so, previously, maybe it was more difficult to have a conversation 15 years ago to fleet customers, but today, they understand the products are great and so we’re having really credible conversations with a lot of the fleet companies.

“The fleet team interest is actually higher than it ever has ever been and we’ve seen growth in the true fleet part of the marketplace as well. And that’s fuelled by the great products behind that, which are really good, from a job need point of view.”

But McLeod is also keen to point out that the company’s success in the larger car market is replicated with fleet users. “I think we offer the user-chooser a decision-making process that is probably more similar to a retail process in many ways. So it’s the same great things that come through that drive our retail growth – the quality, great practicality and value. And I think those are really important parts of our fleet proposition overall.”

The world is changing, though, as are the personal mobility possibilities that will be available in the next decade and beyond. As ownership morphs, in many cases, into usership, carmakers such as Škoda will have to look at a variety of new options, including subscription packages.

“Things will change, particularly in urban environments. You can already see that with things like ZipCar in London, or some of the suburbs that have no-drive zones in them and things like that. So we are looking at some of those things from our 2025 strategy, which we talked about earlier this year at the Geneva Motor Show. So as well as e-mobility, there are mobility solutions, connectivity, autonomous drive – they’re all macro trends in the marketplace that we, as a brand and as a group, absolutely need to address.”

Being able to adapt to these changes – whether in the realms of electromobility, autonomy or the other changes on the horizon – is perhaps slightly easier for a brand such as Škoda, as part of the huge Volkswagen Group, enabling it to share resources with a range of other marques.

“I think being part of a group is hugely beneficial to us,” McLeod said. An example would be the MEB platform [Volkswagen’s dedicated platform for EVs]. The economies of scale, in developing that platform, can be used by several other brands across the group, which is great. But actually, the brands have a lot of autonomy as well, so we can lead our own way in some of the areas as well.

“So I think there is a good balance between taking advantage of those economies of scale, which will be

really important, but also being entrepreneurial as a brand: some brands will lead some projects and some will lead others. We certainly will be progressing in some of those as well.”

Fundamentally, however, McLeod’s confidence comes from the products in Škoda’s model line-up. “At the heart of it, it’s the product. It’s the quality of the products and making relevant products for consumers, which I think we do today, and I think from what I’ve talked about, you can see in the future how we’re evolving in terms of that and emotionalising the brand to create more attachment to it as well.

“Then I think today we offer a great service for our dealer network, which had to evolve like all of our competitors, as well to have a platform where you can choose the services that you want – whether it’s a car for a weekend or a car on demand. That’s the future and we will have to evolve for that. Digitalisation is also really critical for our future, which is about joining together with the customer journey and offering different solutions.”

Škoda’s more focused strategy, along with a product line-up that promises to keep pace with the changes in the mobility, should ensure that the brand’s growth continues.

Škoda, like much of the car industry, has plans for electrification that start in 2019.

McLeod told us: “By 2020, we’ll have the PHEV Superb so we’ll have the plug-in hybrid there. We’re going to have an E-Citigo, as well, a pure electric version of the Citigo. And then we’ll have the car based on the Vision E concept car shown at last year’s Frankfurt Motor Show, which will be a B-segment SUV with a range of over 300 miles.

“In a couple of years’ time, the Škoda landscape will look really different. I think what the Vision E car will bring is that the quality of the product based on the MEB platform, as well as great design, will overcome a lot of the issues around range anxiety today. We’re making really good progress in that area, so I think we will be very well placed to handle that change in market.

“Today, the market’s about 5%, in terms of electrification, with most of the independent experts saying that it’s probably going to increase to around 10% in 2020, then going up to about 25% in 2025. By 2025, Škoda will have 10 electrified models, with six of those being pure battery electric vehicles.”