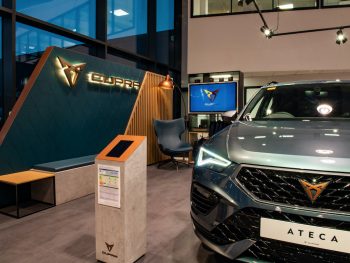 Outlets include some 58 retail spaces and two forthcoming retail stores

Outlets include some 58 retail spaces – which are still located within existing SEAT dealers but with Cupra specialist teams and a more brand-specific approach – as well as two forthcoming retail stores. These will be located at White City Westfield shopping centre, separate to the existing SEAT store, and at Lakeside shopping centre in Bromley. Retailers will also offer timed appointments, enhanced longer test drives and tailored Cupra services.

The network will be expanded and will develop standalone sites as the brand continues to grow further in the UK.

The opening of the retail network coincides with the arrival of Cupra’s bespoke Formentor crossover model and of its Leon plug-in hybrid hot hatch and estate and the recently updated Ateca. Forthcoming Cupra models also include a hot hatch version of the SEAT el-Born electric concept, due next year.

Richard Harrison, Cupra UK managing director, said: “With a more premium identity and an approach that is centred entirely around the customer, the new retail network is unmistakably Cupra, and we’re excited to introduce the brand and its exciting new products to new customers across the UK.”