Coventry City Council has extended its consultation on ways to cut emissions levels in the city without needing to introduce a charging Clean Air Zone. 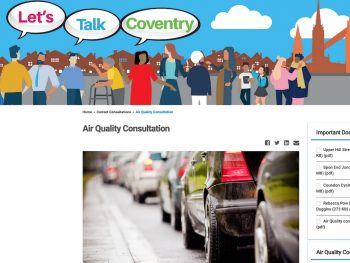 The consultation has been extended for a further five weeks

The consultation, which opened in March, puts forwards plans to enable the council to bring nitrogen dioxide (NO2) levels in line with air quality objectives, backed by grant funding of £24.5m. Although the council had been exploring a Class D CAZ, which would have levied charges on all non-compliant vehicles including cars and vans, it’s repeatedly maintained that a charging CAZ was not needed.

More than 150 individuals and groups have already provided feedback in the consultation, which was due to end on 26 April. However, due to the Covid-19 restrictions, the council has extended the consultation by a further five weeks to enable people to respond.

The plans set out how re-routing roads, improving pedestrian access and investing in electric buses as well as promoting electric taxi and car uptake would bring the requisite reductions in emissions; the measures have already been found to be generally supported by residents and businesses in a consultation in December 2018.

Cllr Jim O’Boyle Cabinet Member for Jobs and Regeneration said: “We had planned public drop-in sessions to explain more about the plans but because of Covid-19 restrictions we cancelled these.

“We had already spoken to dozens of people when we discussed proposals in December 2018.

”When we did, residents and businesses were generally opposed to the idea of a charging CAZ D and in favour of various highways and other measures to address NO2 emissions.”

He added: “Local people and businesses rejected a CAZ D so the challenge now is to achieve NO2 reductions through a combination of behaviour change, cleaner vehicles and targeted junction and road layout improvements in areas where NO2 levels are above the legal limit.”

“We want to explain more about these schemes and it was important that due to the current social restrictions we give people more time to respond.”

Although the council is required to submit a final full business case to the Government, the submission date of 19 June is now likely to be moved later in the year to reflect the lengthened consultation period.

Coventry City Council said that lockdown measures have already provided evidence of less traffic and NO2 pollution but the figures are likely to rise once lock-down measures begin to ease.

The council’s announcement on the consultation extension comes after Greater Manchester’s own consultation on its Clean Air Plans was put on hold due to the pandemic, while the Government has said the planned launch this year of Clean Air Zones in Leeds, Birmingham and Bath has been pushed back to 2021.