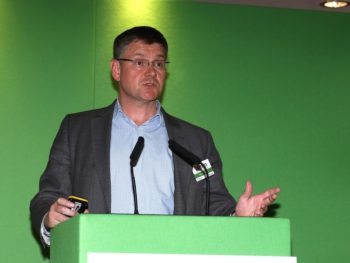 Harvey Perkins, director of HRUX, speaking at the ICFM conference

So said Harvey Perkins, director of HRUX, speaking earlier this week at the ICFM conference on ‘Fleet Resilience – Managing Uncertainty in the Current Climate’, which also saw the Office for Low Emission Vehicles (OLEV) pledge that clarity on future two major announcements from Government, due imminently, will aim to deliver clarity to fleet managers and company car drivers in terms of both future Benefit-in-Kind tax rates and vehicle choice.

At the ICFM event, held at Wembley Stadium in London, Harvey Perkins highlighted how recent years have seen drivers opt out of company cars in droves – the last set of Benefit in Kind statistics from the Government show 940,000 drivers paid BiK on a car in 2016/17; down 20,000 compared to the previous year – and Perkins says it’s because rates of company car tax are now “too high”.

Perkins told conference attendees: “The rate of attrition of tax rates is too high and the implication is that company cars were a good deal two or three years ago, but are now a terrible deal. Many drivers do not know what the cost of their company car will be until they have to order a new one. They then find out what the tax is and, as a result we are seeing more people opt out.”

However, with Benefit-in-Kind tax rates on zero-emission cars due to reduce to 2% from 16% in 2020/21 – and those for plug-in hybrids also due to also tumble – Perkins said: “Drivers will spend more money in Starbucks than in company car tax if they have a pure electric car. It is really an unbelievable deal.”

With plug-in hybrids also “attractive” from a tax viewpoint, he said: “Those with a 40-mile range will have an 8% tax rate which is one of the lowest rates in a generation. These vehicles will be the answer for drivers until 100% electric vehicles arrive in sufficient quantity.”

As a result, he said: “Company cars with CO2 emissions below 75g/km make sense. 940,000 company cars on the road is now the baseline. I think demand will spike in 2020/21, but then it depends on what the Government does in terms of company car tax rates and that we just don’t know.”

With the Government announcement on Benefit-in-Kind tax rates from 2021/22 pending, Perkins predicted: “We expect tax rates will rise, but maybe not immediately. If that happens, the number of company cars on the road will, over time, decline.”

Meanwhile, the ICFM event also saw OLEV make a conference pledge that two major announcements from Government, due imminently, will aim to deliver clarity to fleet managers and company car drivers in terms of both future BiK tax rates and vehicle choice.

Phil Killingley, deputy head of OLEV, told the conference: “HM Treasury recognises the uncertainty and wants to get an announcement out as soon as possible. Having uncertainty on benefit-in-kind tax rates beyond 2021 is recognised. I’m hoping there will be clarity very soon.”

Killingley also talked about the future of the Plug-in Car Grants, which have been in the headlines recently after the SMMT highlighted how plug-in hybrid demand has plummeted on the back of the abolition of the grants for PHEVs while rates for full electric and hydrogen fuel cell vehicles have also been cut.

Killingley said: “We will need to exit grants eventually as uptake increases. Grants have been in place since 2011 and supported the purchase of more than 200,000 vehicles. Vehicle incentives will be of continued importance beyond 2020 but the detail is still being talked through.”

He said that an announcement on the future of the Plug-In Grants would be contained within this year’s Spending Review. However, the review is being impacted by Brexit and ensuing political uncertainty, so there is no information on how many years it will cover – four years is the usual term – or when any details will be announced.

However, with just 2.6% of cars registered in 2018 being ultra-low emission and only 0.5% of vans, Killingley acknowledged: “There is an awfully long way to go to drive down emissions.”