Citroën will launch a heavily updated version of the C4 Cactus early next year, with toned down styling and a step up in refinement and comfort aimed at broadening its appeal. 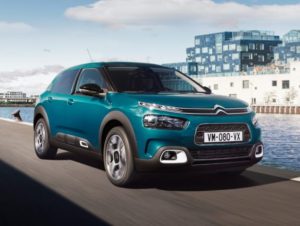 The biggest change is a thorough styling overhaul, reducing the size of the protective ‘Airbump’ panels on the bodywork, with front and rear lighting more aligned to the C4 Picasso than its predecessor. Discrete but notable, the ‘Cactus’ badging has been removed from the tailgate, suggesting that it could soon replace the C4 hatchback, though it’s still visible on the C-pillars.

Most of the changes are mechanical; this is the first car launched in Europe to feature the Progressive Hydraulic Cushion suspension, a unique system which is designed to offer pliant ride quality without blunting handling. Comfort features also include new seats designed to improve posture and long-distance comfort, as well as thicker windows and improved sound deadening to cut wind and engine noise.

Subtle updates inside mean there’s now an LED light for the rear seats, two deep cupholders in front of the gearstick instead of the single shallow one on launch cars, plus one-touch windows and folding door mirrors, depending on trim. Citroën has also equipped the C4 Cactus with a new capacitative touchscreen, with Android and Apple smartphone mirroring and internet-connected navigation, and a range of new assistance features including lane-keeping, autonomous braking and keyless access.