Work to prevent Blackwall Tunnel closures by Transport for London (TfL), social navigation app Waze and Eurotunnel has seen closures reduced by around 15%. 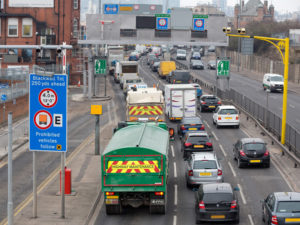 A queue of traffic on the approach to Blackwall Tunnel

One of the busiest sections on London’s road network, the tunnel faces frequent issues with cars running out of petrol, and lorry drivers unaware their vehicles are over-height, resulting in nearly 400 hours of delays each year.

Targeting this, a six-month campaign run by Waze in cooperation with TfL has been reminding drivers approaching the tunnel to have enough fuel, leading 459 drivers to reroute to local petrol stations. There was also a reduction in the number of tunnel breakdowns compared to the same period last year.

Meanwhile TfL is working closely with Eurotunnel Le Shuttle Freight to tackle the number of over-height incidents occurring at the Blackwall Tunnel through a leaflet programme. And earlier campaign to advise Londoners of the busiest times saw 2% of frequent drivers retime their journeys to reduce delays.

TfL has also developed proposals to build the Silvertown Tunnel, linking the Greenwich Peninsula and the Royal Docks, to reduce congestion at the Blackwall Tunnel.