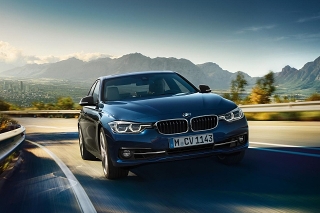 According to a company spokesperson, the new 320d ED Sport model has been introduced following feedback from residual value setters that used buyers are looking for the sports kit that was previously not included on the ED model.

The new model is intended to combine the low carbon emissions fleets want, with the style that used buyers want by combining the sporting design characteristics of Sport trim, to the class-leading efficiency of the 320d ED engine. Based on the recently introduced ED Plus model and powered by the new 161bhp 2.0-litre engine, it's available with either a six-speed manual or the eight-speed automatic transmission.

It shares most of the economy-boosting features of the ED Plus, the range's most efficient model, including lower suspension and Active Air Flaps in the kidney grille.

However, the larger wheels mean fuel economy is reduced from 74.3mpg to 70.6mpg on the saloon with the automatic gearbox (68.9mpg for the smaller-selling manual), with a corresponding rise in CO2 emissions from 99g/km to 104g/km (108g/km for manual versions). The 320d ED Sport Touring returns 67.3mpg and emits 111g/km CO2 with the automatic transmission.

As a result, the saloon qualifies for a BiK rate of 19% and VED Band B for both automatic and manual versions, with the Touring models rated at 20% BiK and VED Band C. The new model also reaches 62mph in 7.8 seconds and a top speed of 143mph.

Priced from £30,205 for the saloon and £31,505 for the Touring model, the ED Sport provides an additional £840 of standard equipment for only £500 more than the ED Plus model. Equipment includes 17-inch light alloy wheels as standard, as well as Business Navigation, a selection of Dakota leather upholsteries, Sports steering wheel, bespoke trim finishers and Heated Sports Front Seats.

According to figures, the new 320d ED Sport will bring a £350 increase in residual value of the vehicle over the ED Plus.

A company spokesperson added: “We expect similar sales of both ED Sport and ED Plus. Due to the RV lift on the ED Sport, customers only have to pay an additional £3 [per month] to have the ED Sport.”