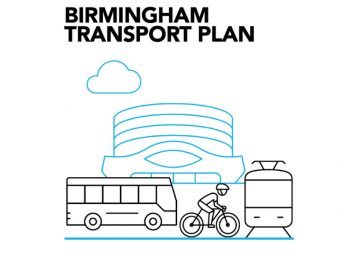 The newly revealed draft Birmingham Transport Plan – which will initially come under Cabinet scrutiny on 21 January ahead of a possible public consultation – sets out four ‘big moves’ to manage car travel and help encourage public transport instead, cutting emissions and congestion in the process.

This could see access to the city centre limited for private cars, with no through trips. Instead the city centre would be remodelled, with pedestrian streets and public spaces integrated with public transport services and cycling infrastructure, placing the focus on active travel.

This would be backed by measures to repurpose the A38, including rerouting it to an upgrading ring road. Meanwhile in local neighbourhoods, a programme of measures, including default 20mph limits on all local roads, would also encourage active travel, helping to counter the city’s record levels of obesity among the population.

Public transport would also be promoted, including through a bus and Sprint rapid transport network and an extended Metro network.

And logistics and service journeys to local centres would be managed to focus on ‘out of hours’ operations while the council would encourage businesses to increase their use of e-cargo bikes for last-mile deliveries.

Under the fourth prong of the plan, parking would also be used as a means to clamp down on car travel. The council has already said it’s looking into a workplace parking levy and the latest plan sets out that commuter car parking will be limited in areas well served by public transport, such as the city centre. On-street parking spaces will be prioritised for users with disabilities, cyclists, car clubs and other sustainable travel. Public transport and cycling provision will have priority over future car parking provision while parking will be restricted outside schools.

Councillor Waseem Zaffar, Cabinet Member for Transport and Environment, said: “As a city, we have been over-reliant on private cars for too long and with more people choosing to live and work in Birmingham, we need to find innovative new ways to keep the city moving in an efficient but sustainable way.

“The more journeys we take by walking and cycling, the more we will improve air quality and our health and the more we will reduce congestion. For longer journeys, buses, trams and trains will be the backbone of a new, go-anywhere transport system.

“Good transport is the most important ingredient in ensuring that the benefits of Birmingham’s growth are felt in every part of the city. To unlock the potential of transport, we need to fundamentally change the way people and goods move around the city.”

He added that this July’s planned introduction of Birmingham’s Clean Air Zone underscores its plans to become a zero-emission city.

Originally due to go live at the start of January 2020, the Class D Clean Air Zone – which covers all vehicle types including private cars and vans – is now expected to go live in July 2020, following government delays. More recently, Bristol has caused some consternation by announcing plans to ban all diesel cars – including latest-generation Euro 6 models – from March 2021.

Responding to the draft plan, Chris Yarsley, policy manager for the Midlands at the Freight Transport Association (FTA), called on the cuncil to reconsider its plans to impose restrictions upon freight vehicles entering the city during the daytime.

He continued: “While some goods can shift from being delivered in the day to the night-time, most are dependent on when the goods are ready or when customers are available to receive them – for example, fresh goods for sale that day and ‘just in time’ deliveries to meet urgent needs.

“However, it is encouraging to note that Birmingham City Council has acknowledged the vital role the logistics sector plays in ensuring the city centre remains an attractive place for people to live, work and visit. None of this would be possible without commercial vehicles having access to the city to supply the offices, shops, schools, medical and leisure facilities that residents demand and use. FTA supports the Council’s aim to reduce the volume of private cars in the city; the proposals will ensure that the vehicles that truly must have access to the city – including many freight vehicles – benefit from more reliable and sustainable journeys.”

Yarsley also said the FTA was sceptical of the council’s decision to encourage businesses to increase their use of e-cargo bikes for last-mile deliveries.

He continued: “The reality is that one medium sized lorry – driven by one driver – can do the work of 100 e-cargo bikes. In the opinion of our members, this proposal does not provide the most effective way to reduce pollution and congestion in the city centre. FTA is also sceptical of the role a consolidation centre could play in reducing the number of commercial vehicles entering the city centre, given the varied nature of goods that are required within Birmingham and the unique needs of each business served.”

If Birmingham City Council’s draft transport plan gains Cabinet approval on 21 January, it will then go out to public consultation from 28 January, before a final version is formally adopted by the council.