When it comes to replacing windscreens that conceal sensitive Advanced Driver Assistance System (ADAS) sensors, new research by Autoglass has found that using glass made to Original Equipment Equivalent (OEE) standards rather than Original Equipment Manufacturer (OEM) does not impact ADAS functions. 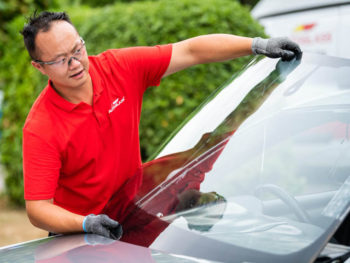 The research, conducted by TRL on behalf of Autoglass, undertook independent tests to compare the performance of ADAS systems calibrated after the installation of OEM and OEE screens. The performance of two ADAS systems (Autonomous Emergency Braking and Lane Departure Warning) were tested under controlled conditions on a test track. After each windscreen change, the ADAS camera was calibrated by Autoglass to the manufacturer’s specification.

The tests concluded that the ADAS technology on a vehicle functions correctly when either OEM or the Autoglass aftermarket replacement windscreens (OEE) are used in the repair work, contradicting claims by some manufacturers. This research does not apply for all aftermarket equivalents, but only the OEE glass used by Autoglass.

Dr Chris Davies, head of technical superiority at Autoglass said, “The use of OEM or OEE glass makes no difference to ADAS functionality.

“This independent research refutes the claim by some manufacturers that their windscreens must be used to ensure the safety technology continues to work properly. This is purely a case of the manufacturers trying to push their own branded products.

“Glass used on vehicles is changing and every year we see more complexity, requiring immaculate quality to house the evolving technology which sits on the windscreen. It is important that the industry is able to adapt and be flexible and our use of OEE glass allows us to offer the best possible service to the customer without any compromise on quality or safety.”

The research by Autoglass in the UK forms part of a global investigation into ADAS calibration and windscreen quality by Belron, parent company of Autoglass. The conclusions reached in the UK are supported by the same research from Belron Canada and Safelite AutoGlass in America, which also tested whether the glass used had any impact on the Automatic Emergency Braking and Lane Departure Warning ADAS functions. The same conclusion was reached across all tests.

Dr Davies continued, “Not all glass is made to the same quality standard, and whilst this new research proves that OEE glass, as used by Autoglass, offers the same level of safety for ADAS calibration as OEM glass, we also know that many [vehicle glass repair and replacement companies (VGRR)] use inferior glass that doesn’t meet the same rigorous safety standards, and that’s a genuine risk.

“This risk will only increase as the number of cars in the car parc with ADAS technology increases. [According to Euro NCAP] it is expected that 22% of cars will feature some form of ADAS technology by 2021, so it’s imperative for the entire industry to ensure that glass used is of the necessary high quality and is not putting drivers at risk.”