Audi has added to its growing collection of SUV coupés with the unveiling of the Q5 Sportback. 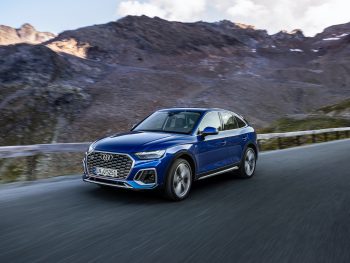 Arriving in the first half of 2021, it’s the latest in the Audi range to get the Sportback treatment and is intended to bring a best-of-both-worlds approach that ties up the looks of a coupé with the versatility of an SUV; Andrew Doyle, director of Audi UK, says that “form often carries as much weight as function for Audi customers”.

The Q5 Sportback will join its standard Q5 SUV counterpart in the first half of 2021, bringing a range that will include TDI and TFSI variants, topped off by the 347hp SQ5 Sportback, but also featuring a plug-in hybrid TFSI e. The launch line-up will also include four trims: Sport, S line, Vorsprung and Edition One.

Slightly longer than its sister model but with identical height and width, the Q5 Sportback offers some 510 litres of boot space, rising to 1,480 with the rear seats folded down – compared to 550 and 1,550 litres respectively on the standard model.

Vorsprung versions offer increased versatility thanks to their sliding rear bench seat plus, which has a 40:20:40 configuration and offers a movable seat base and adjustable backrest angle, enabling luggage capacity to be increased to a maximum of 570 litres. The Vorsprung also gets an optional storage and luggage compartment package.

The launch engine line-up covers includes a TDI and a TFSI; both 204hp 2.0-litre four-cylinder engines featuring mild hybrid tech and branded as 40 TDI and 40 TFSI. The SQ5 Sportback featuring a 347hp twin-turbo V6 TDI also comes in the first wave while a plug-in hybrid TFSIe with a choice of two outputs will arrive later.

The four-cylinder engines are combined with a seven-speed S tronic dual-clutch transmission, while the V6 TDI in the SQ5 Sportback works with an eight-speed tiptronic. All get quattro all-wheel-drive, with some featuring an on-demand system.

From S line level upwards, the suspension is tuned for a tauter ride while a set-up with adaptive damper control is also available. An adaptive air suspension system is used in Vorsprung models, upgraded to an S-specific version for the SQ5 Sportback and SQ5 Sportback Vorsprung, which can lower the rear axle individually by 55mm at the touch of a button.

An Audi drive select dynamic handling system comes as standard and provides a choice of up to seven profiles.

As with the recently updated Q5 SUV, the Sportback gets the third generation of Audi’s modular infotainment system, or MIB 3, which swaps out the rotary MMI control dial for full touch-screen functionality for the monitor, as well as introducing a far more evolved natural language voice control system, accessed via a “Hey Audi”.

The Audi Virtual Cockpit plus with its panoramic 12.3-inch display is standard for all versions in the UK, as are MMI Navigation Plus and Audi connect internet connectivity, including real-time lane-by-lane information on traffic flow and hazard alerts.

Vorsprung versions also add in features such as rear lights with digital OLED technology, a 19-speaker Bang & Olufsen audio system, a head-up display, Audi Phone Box wireless handset charging and a host of advanced driver assistance upgrades plus an upgrade from the standard cruise control to adaptive cruise assist. This also enables the predictive efficiency assistant to automatically adjust the driving speed to suit the situation, the topography of the route, speed limits and road users up ahead. Audi says it can help to reduce fuel consumption by as much as 10%.