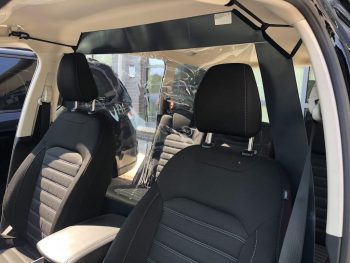 It’s part of its work to ensure its full fleet of some 4,000 vehicles feature protective screens to keep both passengers and drivers safe during the pandemic.

The new screens have been developed by Ford and use a material that complies with all regulations set out by TfL, while still enabling all-round driver vision and communication between driver and passengers. They’re also designed to not obstruct safety features, such as airbags.

Addison Lee is also continuing its work to find TfL-approved screens for the rest of its fleet. The private hire giant announced in May that it was installing partition screens but TfL’s introduction in June of retrospective guidance for the installation of safety screens in PHVs meant they needed to be removed.

Commenting on the tie-up with Ford, Addison Lee CEO Liam Griffin commented: ‘‘We have worked together to design, manufacture and fit a safety screen that will add an extra layer of reassurance for commuters starting to return to work and for employers who want to offer staff a flexible and safe way to travel.

“Safety screens have been a challenging issue for the PHV industry over the last six months and we are pleased that, by working in collaboration with a close partner of ours, we have been able to find a solution that satisfies the regulator and enhances everyone’s safety.”

The company added: “Our aim is to have safety screens across our entire MPV fleet. We are currently working on a screen for the remainder of our vehicles and will be working with TfL to secure its approval as quickly as possible.”

Other work by Addison Lee during the pandemic has seen provide drivers with personal protective equipment, deploy regular electrostatic disinfection of vehicles and facilitate social distancing using the rear seats of its seven-seater vehicles.