This year’s Operational Fleet Insight Report from BT’s Fleet Solutions sheds light on how businesses are responding to the latest fleet challenges. We look at the main findings. 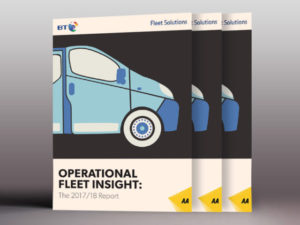 The report, which was commissioned in partnership with the AA and surveyed 514 respondents, found fleet managers want more information and thought leadership around the uptake of alternative fuel sources within their operational fleets, especially around low emission and electric vehicles.

When asked about their current fleet make-up, 94% of those surveyed said their fleet currently consist of diesel or petrol fuelled vehicles, while 30% are running other fuel types, including electric and plug-in hybrids and hydrogen fuel cells. In five years’ time this changes to 74% and 63% respectively.

However, there are a number of barriers that need to be overcome on the way, including vehicles that provide a viable alternative, particularly for rural areas, with this having proved a key stumbling block for the many respondents who had already trialled small numbers of electric vehicles.

82% of all fleet managers say that if electric vehicles could travel further, they would be more likely to incorporate them within their fleets, whilst a similar number would be driven by better infrastructure (82%), range of choice (80%) and larger payload capability (79%).

Fleets also feel that lobbying for greater investment in EV infrastructure should be led by the government (47%) while 43% say manufacturers should be responsible and 30% believe it’s down to fleet providers.
And the research also indicated high awareness and support for clean air zones, with 66% f respondents backing their introduction.

As fleet roles become increasingly fragmented, many businesses are looking for a strategic partnership with manufacturers, suppliers, fleet management companies and leasing partners. However, the view was put across that such partnerships can be hard to establish in real terms.

The research found that due to a shortage of time, many fleets do not have the time to adopt a more strategic stance. Only a third (34%) of respondents said their role is entirely or more often focused on the day-to-day operation of their fleet, with a further third splitting their time equally between the day-to-day and longer term strategy. As a result, it can be hard for fleet managers to keep abreast of wider market trends such as alternative fuels, new regulations, electric vehicles and the impact of Brexit.

Currently businesses use a wide range of sources for advice on managing their fleet and wider market trends. Whilst manufacturers (42%), fleet management companies (40%) and leasing partners (32%) are most common, others typically mentioned include motoring organisations (27%), industry groups (26%) and governmental organisations (18%).

When considering what is most important to them when purchasing or leasing vehicles for their organisation, 59% of fleet managers said that ensuring vehicles are less likely to breakdown is a crucial consideration, second only to getting the best price or deal (62%).

A quarter of fleet managers say that purchasing new vehicles on a regular basis is a key way of trying to reduce vehicle downtime within their fleet.

Purchasing vehicles that are knowingly cheaper to repair is another key way (19%) of attempting to reduce time spent off the road.

The report identified that a key area where strategic partnerships and advice would be especially helpful for fleet managers is in the area of regulatory compliance.

Although only 37% of respondents were aware of the BVRLA’s proposal for the new licence, 49% of fleet managers supported the idea.

The UK vote to leave the EU is already taking its toll on some UK fleets, with the true impact of Brexit yet to be felt.

The report found that 66% of respondents feel they have been impacted by Brexit, mainly due to rising fuel costs and the exchange rate, and 68% are expecting impact over the next 12 months. Although a total of 34% of fleet managers reported that they have felt no impact at all from Brexit so far, only 9% of these expect to experience a significant impact from Brexit in the next 12 months.

The research also found that the response of most fleet managers is to continue with business as usual until the picture becomes a little clearer. And there’s also a sense that as the overall impact of Brexit settles, the issues that affect fleet managers most will not be the highest priority for the government to sort out in the short term.

Previous: Severn Tolls to be cut from January
Next: HMRC confirmation on salary sacrifice to cut costs for fleets