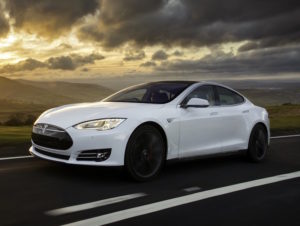 Held last night (Wednesday 16 November) at the St John’s Hotel, Solihull, the 2016 event showed the changing face of fleet management, with Tesla gaining its first ACFO awards in recognition of its rising role in the company car sector.

Meanwhile BMW was highly commended in the Environmental Initiative of the Year and the Mercedes-Benz C-Class Plug-in Hybrid Electric Vehicle was similarly recognised in the Fleet Car of the Year category.

The Jaguar XE, which entered UK showrooms 17 months ago, retained the Fleet Car of the Year title won last year, while the BMW 3 Series was also highly commended in the category.

Road safety charity Brake joined the ranks of ACFO Award winners for the first time, scooping the Fleet Safety Initiative of the Year for providing fleet decision-makers with a range of resources to further improve occupational road risk management across the corporate sector. The Fleet Operator Recognition Scheme was highly commended in this category, marking its first-time mention at the awards.

The Large Van of the Year and Small Van of the Year Awards were respectively taken by the Mercedes-Benz Sprinter and the Volkswagen Caddy. The Sprinter last won in 2010 and the Caddy two years ago.

John Pryor, chairman of ACO, said: “The fleet industry continues to evolve and 2016 could be viewed as a watershed year as managers through their votes recognised that electric vehicles have a role to play in their company car operations.

“Significantly more than half of all new cars are bought by the corporate sector. Therefore, with the Government continually seeking to drive up demand for ultra-low and zero emission cars it is critical that models such as those from our 2016 award winners Tesla and BMW find favour with fleet managers and company car drivers.”

Fleet Safety Initiative of the Year (sponsored by Activa Contracts)

Fleet Service Company of the Year (sponsored by Skoda)

Environmental Initiative of the Year (sponsored by Bott)

Small Van of the Year (sponsored by Zenith)

Large Van of the Year (sponsored by Commercial Fleet)

Green Vehicle of the Year (sponsored by Prolegal Solicitors)

Fleet Car of the Year (sponsored by Lex Autolease)