Volvo’s compact SUV to take a quarter of UK sales

Volvo’s forthcoming rival for the Audi Q3 and BMW X1 SUVs could account for over a quarter of its UK volume, representing a significant corporate opportunity, according to Volvo Car UK managing director, Jon Wakefield. 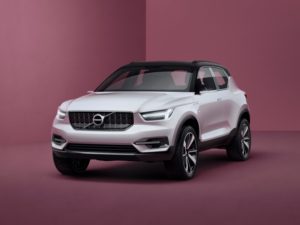 Volvo previewed the XC40 as a crossover concept last year.

Previewed in concept form last year, the XC40 will launch early in 2017, closely following an all-new XC60 and just before the new S60 and V60. Positioned alongside the V40 Cross Country, it’s the first product on Volvo’s new compact car platform and extends the range into a new segment, rivalling premium-brand compact crossovers.

It’s a significant segment. Wakefield said volumes are two and a half times larger than the XC60’s, still the brand’s second-biggest seller after the V40 line-up, hinting that the newcomer could exceed the larger SUV’s 15,000 UK sales. It will target downsizers as well as drivers coming out of conventional hatchbacks.

However, Wakefield said Volvo isn’t being complacent. Such growth means attracting new customers, and Volvo is investing heavily in getting drivers behind the wheel, as well as re-defining its identity, particularly related to hybridisation – already a 25% share of the XC90’s UK sales mix – and autonomous cars, which build on its reputation for safety but offer time as a “new luxury”.