Kia will equip the Stinger, its rear-wheel drive sports saloon, with a 2.2-litre diesel engine when it launches in Europe at the end of this year. 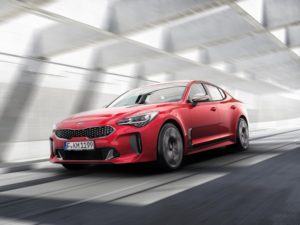 The Kia Stinger will get a 2.2-litre diesel for Europe.

Unveiled at the Detroit Motor Show with its two petrol engines – a 252bhp 2.0-litre turbocharged four-cylinder unit, and 366bhp 3.3-litre twin-turbocharged V6 – the Stinger is slightly shorter than an Optima and designed for “spirited long-distance driving”.

Over a long wheelbase with wide front and rear tracks, the Stinger features a luxuriously appointed cabin and ride and handling tuned at the Nurburgring circuit in Germany under the leadership of Albert Biermann, formerly of BMW, who is now Head of Kia’s Vehicle Test and High Performance Development.

For Europe, the range will include a 197bhp 2.2-litre diesel engine similar to the unit used in the Sorento SUV, paired with the brand’s eight-speed automatic gearbox. A new segment for Kia, it could put the brand in contention with driver-focused premium offerings.

Pricing and CO2 emissions for the newcomer have not been announced yet. Sales will begin at the end of the year.