V2G chargers to open up extra revenues for fleets

EDF Energy is offering UK business customers the option to install Vehicle to Grid (V2G) chargers to enable them to benefit from extra revenues while also helping to balance the grid. 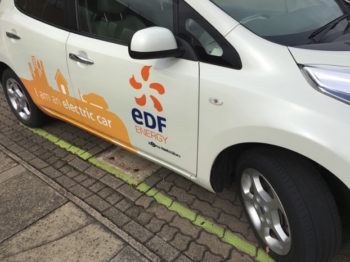 The chargers are being offered in collaboration with green tech company Nuvve and will allow businesses to either use unused electric vehicle energy themselves, or sell it back to the grid. Up to 1,500 will be available in total – said to potentially mark the largest deployment of V2G chargers so far in this country.

EDF will also install the chargers at its own sites to provide up to 15 megawatts of additional energy storage capacity.

The stored electricity will be made available for sale on the energy markets or for supporting grid flexibility at times of peak energy use.

The news follows the announcement earlier this month by EDF president Jean-Bernard Lévy that the group is planning to be the leading energy company for EVs by 2022 across its four largest European markets: France, the United Kingdom, Italy and Belgium.

The announcement included the news that EDF Group and Nuvve have signed a strategic partnership agreement with a view to forming a joint venture to develop V2G solutions in Europe to support the generation of low carbon power and the advancement of new electricity application.

Nuvve has already deployed V2G projects on five continents including a V2G hub in Denmark which has been operational for two years now and is said to be the world’s first fully commercial hub.