This year’s Fleet World/ALD Automotive MPG Marathon is now underway as participants take to the roads around the West Midlands to put their eco driving skills to the test while showcasing the best-performing cars and vans. 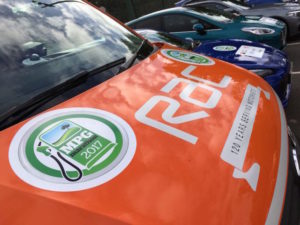 This year’s MPG Marathon recognises the best-performing hybrids and electric cars as well as petrols and diesels.

Based at the Forest of Arden Marriott Hotel & Country Club this year, the event once again challenges competitors to achieve the best overall fuel consumption and highest percentage improvements compared to official figures – however, the twist for 2017 is that both the best-performing hybrid and electric entrants will be recognised in the results as well as diesel and petrol models.

And the event also sees the return of Andy Dawson of Dawson Auto Developments – who last year took the title for the highest percentage improvement in the Ford Mustang, which achieved an overall MPG figure of 36.6mpg against a manufacturer’s combined figure of 20.9mpg; an astonishing 75.12% improvement.

Meanwhile the RAC’s designated Patrol of the Year is once more taking part, with Chris Burgess – who was named as the RAC’s Patrol of the Year in May – looking to do as well if not better than his forebears while his colleagues from the RAC Fuel Patrol team support drivers throughout the event.

Live tracking data is again being provided by fleet tracking specialist Crystal Ball, via its FleetTracker solution, which is enabling analysis of the routes taken and the methods used by drivers to minimise fuel consumption over the next two days.