Pricing revealed for fourth-generation Audi A8

Audi has announced pricing and specifications for its new A8 flagship, which will bring a large number of high-tech developments for fleets. 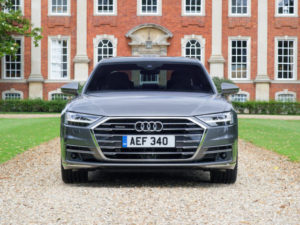 Available to order now, the fourth-generation model is priced from £69,100 and starts first UK deliveries in early 2018, with highlights including the line-up’s first plug-in hybrid, a number of new autonomous driving features, camera-linked adaptive suspension and a new touchscreen operating concept.

Two bodystyles are offered – the 5.17-metre ‘standard’ form or the A8 L, which has a 13cm longer wheelbase – with both offering increased space, including extra legroom for rear passengers.

The line-up also gets the first plug-in hybrid drivetrain in the form of the A8 L e-tron Quattro – this teams up a 3.0-litre TFSI petrol engine and electric motor, which can produce a combined 443bhp and sprint to 62mph in 4.9 seconds, or enable the long-wheelbase luxury saloon to travel 31 miles on electricity, at up to 83.9mph. Fast charging capability is included and the induction-based Audi Wireless Charging, which uses a pad in the garage floor to transfer power inductively to a receiver coil in the car with a power output of 3.6 kW.

However, from launch the A8 will offer two turbocharged 3.0-litre engines covering the entry-level 282bhp 3.0 TDI and a 335bhp TFSI petrol. A 429bhp 4-litre V8 twin-turbo diesel will follow late with a 6.0-litre W12 as well, with all four units using mild hybrid technology and featuring standard quattro all-wheel drive.

The A8 is also the first production car to be developed for conditional automated driving to SAE level 3 and will gradually roll out autonomous driving aids covering the AI parking pilot, garage pilot and traffic jam pilot functions during 2018.For more of the latest industry news, click here.