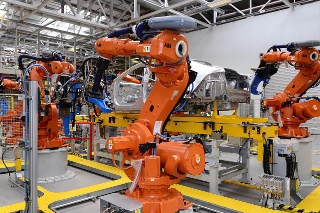 New figures released today (30 June) by the Society of Motor Manufacturers and Traders (SMMT) show that the sector is breaking new records, with turnover hitting an all time high of £69.5bn in 2014. Manufacturing output, vehicle sales, jobs and export values also grew, while the environmental impact from vehicle production has been reduced dramatically.

Last year, car production alone grew to 1.53 million units – the highest level since 2007 – with an increasing number of vehicles built for the domestic new car market, which itself grew 9.3% to reach 2.48 million registrations last year. On current trends, UK car output is expected to reach an all-time record level of 1.95 million vehicles in the next two years.

The industry has also reported huge gains in productivity thanks to investment in more efficient, high-tech manufacturing processes. In each of the five years to 2014, an average of 11.5 vehicles were produced for every person employed in the industry, compared with 9.3 vehicles for the period from 2005 to 2009.

Mike Hawes, SMMT chief executive, said: “The UK automotive industry can be proud of its achievements as it continues to set new standards. The sector is delivering growth in volumes, turnover and employment, while reducing its environmental impact. Continuing to expand in a fiercely competitive global market is a major challenge and will depend on a supportive economic and regulatory environment which promotes investment to foster innovation and continuing productivity improvements.”