Toyota phasing out diesel cars by 2019

Toyota will have no diesel passenger cars on sale in Europe by the end of this year, citing limited demand and widespread uptake of hybrid alternatives. 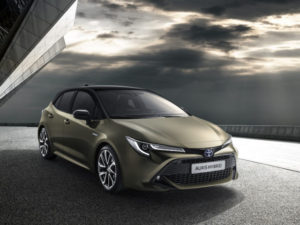 Like the C-HR, the new generation Auris will be offered only with petrol and HEV powertrains.

In 2017, Toyota Motor Europe registrations rose 38% to 406,000 units, of which hybrid electric vehicles (HEVs) made up 41% of total sales. In contrast, diesel made up less than 10% of registrations during the same year. Registrations have become increasingly weighted towards hybrids since 2015, when sales were split evenly between hybrids and diesels.

The new-generation Auris – debuted at Geneva – will be offered only with petrol and HEV powertrains; as with the C-HR in 2016, there will be no diesel version. Engine line-up for the Auris will bring the 121bhp 1.8-litre HEV drivetrain from the C-HR and Prius along with a 114bhp 1.2-litre turbo petrol and a 178bhp 2.0-litre HEV.

Product plans beyond 2018 are unconfirmed, a spokesperson said, but the plans will involve phasing out the Avensis, Verso and diesel RAV4 – in the case of the latter, HEV sales outsell the petrol/diesel models two to one. Toyota will continue to offer diesel engines in commercial vehicles (including Hilux, Proace and Land Cruiser) to meet customer needs.

Johan van Zyl, president and CEO of Toyota Motor Europe, said: “Toyota’s HEV mix in passenger cars reached equality with the diesel mix in 2015. Since then, HEV sales have substantially exceeded those of our diesels. In commercial vehicles, where personal and business needs (for example, torque and payload) remain, we will continue to offer the latest technology diesels.”

Previous: SsangYong Musso ramps up the lifestyle appeal
Next: Quarter of employees put of meetings to avoid expense pay-out