Toyota is introducing a new GR Sport trim to the C-HR compact crossover. 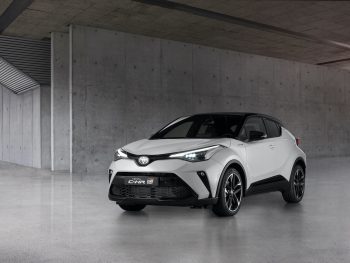 The addition to the range, due early 2021, draws on the carmaker’s Toyota Gazoo Racing division and adds in extra sports styling features and revised suspension and steering.

It will be offered with both the 1.8 and 2.0-litre hybrid powertrains but with sharper driving dynamics, thanks to stiffer front and rear springs and shock absorbers tuned for increased damping force. The 1.8-litre hybrid version also gets the larger diameter anti-roll bar that’s used in the 2.0-litre hybrid for greater stiffness. Steering has also been revised.

Exterior updates include black detailing for the headlight and fog light housings, the central bumper section and the background to the Toyota emblem, along with a dark chrome and bolder front spoiler.

The GR Sport also rides on larger, 19-inch alloys with bespoke tyres and comes with a two-tone paint finish as standard specification with eight colours to choose from, including an exclusive Ash Grey and black roof combination.

As with the interior, the GR logo is made use of, including on the scuff plates, the stop-start button and the start-up animation in the driver’s multi-information display. The interior also has a silver theme and a choice of Alcantara-trimmed leather or all-fabric seat upholstery, both featuring GR-inspired red and grey stitching, and a three-spoke steering wheel with a perforated leather finish with red stitching.