TfL and Met Police clamp down on dangerous driving

A two-week crackdown on illegal, dangerous and careless behaviour on London roads has seen more than 4,700 offences dealt with by police officers. 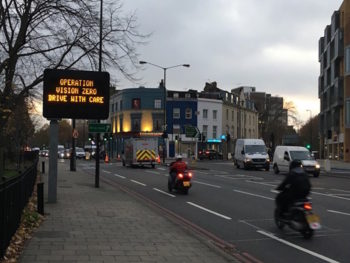 Run by Transport for London (TfL) and the Metropolitan Police Service (MPS), the enforcement programme, named Operation Vision Zero, saw officers deal with issues such as speeding, mobile phone use, no insurance, drink/drug driving and mechanical defects such as steering and lights.

The programme saw 4,758 offences dealt with – more than 800 offences higher than an average two-week period in 2016. A total of 176 drivers were arrested for offences including drink, drug, dangerous and disqualified driving.

There were 507 drivers stopped for mobile phone use, 654 for speeding and 559 caught driving without insurance and 1,394 for mechanical defects. Officers also dealt with 519 cycling offences such as red light jumping.

The initiative forms a joint Vision Zero commitment by TfL and MPS to eliminate death and serious injury on London’s roads by 2041.

Siwan Hayward, director of compliance and policing at TfL, said: “Our message is clear, we won’t tolerate illegal and dangerous behaviour and through our work with the police we will take robust action against those that do. Slow down, be careful and watch out for others.”