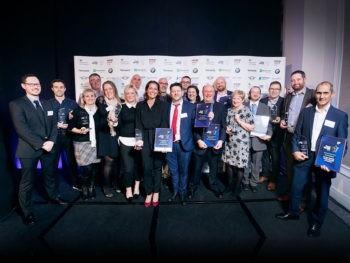 Announced last night (27 November) at a prestigious event at the De Vere Grand Connaught Rooms in central London, hosted by motoring broadcaster Amanda Stretton, this year’s awards – run by the Energy Saving Trust and now in their 13th year – saw nine trophies up for grabs.

This included the Fleet Hero accolade, sponsored by Fleet World as media partner, which went to the London Borough of Hackney, while the Unsung Fleet Hero title went to Fraser Crichton of Dundee City Council – marking the first Scottish win.

Commenting on the awards, Matthew Eastwood, head of transport at the Energy Saving Trust, said: “In this pivotal year for zero emission vehicles which has seen the publication of the Government’s ambitious Road to Zero Strategy, and Birmingham playing host the world’s first international Zero Emission Vehicle Summit, the 13th Fleet Heroes Awards & Conference highlights the extent to which zero emission vehicles are becoming more and more widely adopted into fleet operations, as well as what further innovative developments can be expected over the next five years.

“Congratulations to all the individuals and fleets recognised as Fleet Heroes at the 2018 awards. All are leading the way with their work to reduce carbon emissions and tackle air quality issues and can rightly be held up as shining examples of best in class.”

Roads Minister Jesse Norman said: “Congratulations to all of this year’s winners, who have made an impressive commitment to using zero emissions vehicles.

“Fleet take-up of Ultra-Low Emissions Vehicles is growing at over three times the rate of the rest of the market, and they have huge potential to reduce the environmental impact of road transport and help the UK to meet its air quality and climate change objectives.”