Hitting a series of red lights on the commute to work could become a thing of the past under technology currently on trial by Ford. 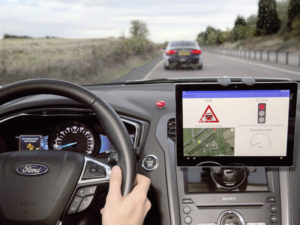 Under the Ford trials, drivers choosing the recommended speed maximise the chance of meeting green lights, based on timing information from roadside units

The carmaker’s Green Light Optimal Speed Advisory uses information on traffic light timings from a roadside unit to display to the driver the best speed to travel at to get a green light. If drivers find hitting a red light unavoidable the system displays how long until the light turns green.

The technology is being trialled on Ford Mondeo Hybrid cars at Horiba Mira as part of the UK Autodrive self-driving and connected car trial. This 16-member, publicly funded £20m project marks a UK first for collaboration between Ford, Jaguar Land Rover and Tata Motors European Technical Centre to develop and trial vehicle-to-vehicle and vehicle-to-vehicle infrastructure technologies.

Trials will also take place on both public roads and closed circuits in Milton Keynes and Coventry during the next two years with the intention of making driving less stressful and time-consuming, and improve fuel efficiency.

Other technologies being trialled on the Ford Mondeo Hybrids are Emergency Electronic Brake Lights, which warn when a vehicle up ahead suddenly brakes hard – even if the incident occurs out-of-sight – up to a distance of 500 metres.

Also on trial is Jaguar Land Rover’s Advanced Highway Assist that enables the vehicle to overtake vehicles automatically as well as stay in its lane on the motorway without the driver having to touch either the steering wheel or the pedals.

Tony Harper, head of research, Jaguar Land Rover, said: “We know that there’s a huge potential for these technologies in future vehicles around the world. Until now we have focused on communication between Jaguar and Land Rover vehicles, this collaborative approach is a major stepping stone towards all Connected and Autonomous Vehicles co-operating with each other in the future.

“Our aim is to give drivers exactly the right information at the right time and collaborations with other manufacturers are essential to help us deliver this commitment to our customers.”

Technologies that will be trialled next year also warn drivers when another vehicle is blocking the junction ahead; when an ambulance, police car or fire truck is approaching; and prioritises vehicles arriving at intersections without traffic signs or traffic lights.

Previous: Women more likely to see red behind the wheel
Next: ‘Total cost of mobility’ approach is key to cutting costs