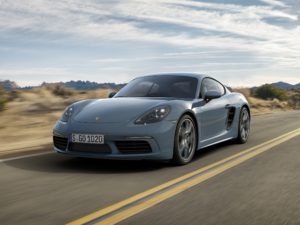 Ever-tighter CO2 targets mean small engines and electric motors are becoming a given. Even so, it’s not surprisingly to see Porsche had ruffled a few enthusiasts’ feathers when it revealed that its mid-engined sports cars would be shedding a couple of cylinders in exchange for a turbocharger as part of a heavy refresh.

If any brand is going to do this right, it’s Porsche. These are the latest in a long bloodline of four-cylinder sports cars; the 356, 550, 914 and 924 among them, as well as the 911-derived 912, and the 718 racer of the 50s and 60s. Likewise, turbocharging gave the 934 and 935 an edge over the higher-capacity muscle cars of 70s GT racing, becoming so dominant that rival manufacturers campaigned for rule changes to keep them out. Making the most of relatively small engines is a brand speciality. 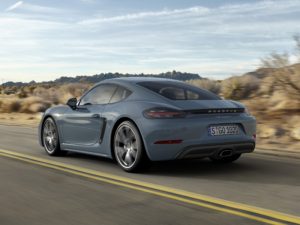 There’s more to this than a change of capacity. Almost every body panel is new, now sharper-edged and finished with three-dimensional Porsche script under the rear spoiler. For the first time, the Cayman and Boxster are grouped together under the 718 family – a nod to the multi-race-winning original which also had a mid-mounted four-cylinder engine – and the range structure is aligned to the 911. So there’s only a £2,000 price difference between them, and the Boxster roadster has become the more expensive of the two.

That’s good news for enthusiasts, as the lighter, stiffer, coupe version is the more accessible model. And on paper, it shapes up well. The new 2.0-litre four-cylinder produces 300bhp, 25bhp more than the larger engine it replaces, and comes paired with either a six-speed manual (as tested here) or a more economical, but £2,000 more expensive, seven-speed PDK double-clutch unit. Aluminium panels help keep weight down to around the same as a Golf GTI, and there’s no four-wheel drive system to blunt the power delivery. 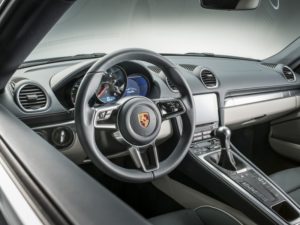 Of course, downsizing has changed the character of the car. Turbocharging delivers noticeably more mid-rev punch than the old six-cylinder engine; peak torque is delivered right where you want it on a downshift and hangs on most of the way to the redline when you’re stretching its legs. It feels light, revvy and responsive, helped by quick 911-derived steering, wider wheels and bigger brakes all round, and 62mph arrives in 5.1 seconds. Entry-level doesn’t mean it’s a soft option.

The downsides? Well, there’s no discernible improvement in fuel economy when you’re not pressing on, and the six-cylinder engines were much more refined. The Cayman’s exhaust note is strikingly similar to a turbocharged Subaru, predictably given they both use a flat-four layout. It’s little coarse though not unappealing, especially when it’s set to its noisier driving mode.

And, if you’re just commuting, there’s a lot to love. The re-tuned suspension copes well with rough British road surfaces, the redesigned cabin with its thick-rimmed 918 Spyder steering wheel is very comfortable on long journeys, and there’s a surprising amount of luggage space split between the front and rear compartments. However, most equipment is optional, and there’s a bewildering array of ways to bump up the cost of the Cayman once you add them.

Of course it’s a different experience with two fewer cylinders. But the 718 Cayman has become a character in its own right; quick, light, agile, in ways classic four-cylinder Porsches always used to be, and with its own sense of style compared to the 911. A modern problem, solved with some well-established thinking.

The 718 Cayman punches well above its weight in performance terms, while still ticking the boxes as a day-to-day commuter car. Treat yourself – you won’t be disappointed.

Previous: Electric vehicle advances to come under spotlight at 2018 Fleet World Honours
Next: Asda cuts fuel prices by up to 2ppl