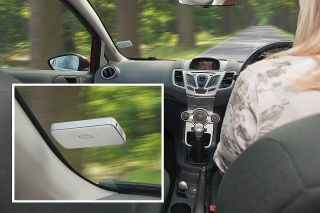 Dubbed Road Guardian, the scheme is being supported by TRACKER, AXA and Fleet Financial and provides motorists with vehicle cameras designed to record and store real-time, 24/7 video images, including vehicle usage and driver behaviour information.

The technology provides drivers with invaluable advice and support on how to correct bad driving habits. In addition, a telematics insurance box, such as that offered by TRACKER, records driving behaviour and can evaluate an individual’s likelihood to have an accident, information that is vital in assessing insurance premiums.

Road Guardian is being launched today (13 February) at 9.30 at the Titanic Centre and is being attended by several key government figures including Jim Shannon MP DUP Spokesman on Health and Transport, Naomi Long MP and current deputy leader of the Alliance Party of Northern Ireland and Northern Ireland Justice Minister David Ford.

Road Guardian was founded by its managing director, Sean Brown. He is a former Police Advanced Driving Instructor with the Police Service of Northern Ireland and a DOE approved driving instructor and founder of Road Safety Awareness NI.

‘In 2014, there were over 79 deaths, as a result of road accidents in Northern Ireland,’ said Brown.

‘The rate of road deaths, according to the PSNI in Northern Ireland, increased by 38% in 2014 compared to 2013, and this compares to the more modest increase of 3% across Great Britain. This is a shocking statistic and demonstrates the importance of stepping up the campaign to raise awareness of the issue, and help motorists improve their safety by making changes to the way they drive. We are working closely with TRACKER, insurers and the Government to promote the vital need to improve road safety in Northern Ireland.’

The first of a number of insurers and insurance brokers to recognise and reward drivers for embracing this technology is AXA which is offering a discount of 10% on insurance premiums to taxi drivers in Northern Ireland who fit a Road Guardian camera.

Fleet Financial, a contract hire and vehicle management company based in Belfast, is also an early adopter of Road Guardian.

Ross Moffett, business development manager for Fleet Financial added:  ‘The team at Fleet Financial is proud to partner with Road Guardian. We see Road Guardian as added value to our clients from not only an insurance point of view but more importantly, from a driving safety and management aspect.’

Previous: VW Group to fit TomTom Traffic on European models
Next: One in 10 drivers would ignore “red X” lane signs on motorways