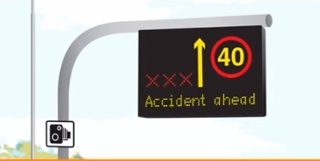 The call comes from the AA as new research finds that around 10% of drivers would seek to take advantage of an empty first lane – even if it was closed to prevent an accident.

AA Populus research among 19,887 AA members between 18 and 26 November 2014 also found that the loss of the hard shoulder means that 56% of the sample would carry on driving with a flat tyre until they reached an emergency refuge area or the next motorway exit.

With spacing between emergency refuge areas extended from 800m on the M42 pilot scheme to a new standard of up to 2500m, cars could be limping along for up to 1.5 miles in fast traffic.

The AA has voiced its concern about the safety of all-lane-running motorways from the start, saying that the speed with which a dangerous situation can be identified, located and the lane closed, as well as an insufficient number of "emergency refuge areas", leaves vehicles vulnerable to almost entirely rear-end impacts.

It added that government road casualty statistics revealed that, although there are fewer motorway accidents involving back-seat passengers, those passengers are more likely to be killed.

Edmund King, the AA's president, said: The AA applauds the government's move to increase motorway capacity – but it can't be done on the cheap by skimping on safety features. Emergency refuge areas may add to the cost but drivers are more likely to try to get their stricken vehicles into the next safe haven if they know it's close. Not only does that make the highway considerably safer, but it keeps the traffic flowing – which is the whole point of all lane running.

‘We soon spotted the safety compromises and worked quickly to try to protect our members on these more hazardous stretches of motorway. However, long-established safety procedures for motorway breakdowns where a hard shoulder is present need to be updated for when there isn't one. There should be no doubt in drivers' and their passengers' minds as to what they should do when a car breaks down on a motorway without a hard shoulder.’