A new anti-idling campaign from Renault has launched to tackle the quarter (27.2%) of parents who admit to engine idling on the school run. 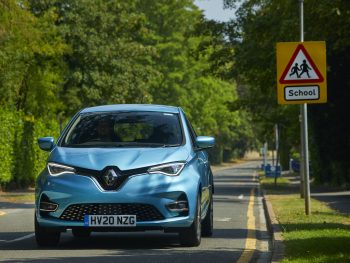 One in three children in the UK are growing up breathing unsafe levels of air pollution and the problem is likely to intensify in the coming weeks as children return to school following the pandemic. Research from Renault has found 62% of parents say they are now more likely to drive their children to and from school. That’s despite the fact that a quarter of all school runs are less than a mile in distance.

The carmaker’s study of more than 4,000 ‘school run’ parents and motorists revealed that men are 50% more likely to leave their engines running than female drivers; 32.7% of male participants said they were guilty of it compared to 22% of women.

The research also found that 60% of all drivers are unaware that leaving their engines running while stationary is illegal under Rule 123 of the Highways Code. Authorities can now issue £80 fixed penalties under Road Traffic Regulations 2002 and Section 42 of the Road Traffic Act 1988 in Scotland.

“The fact that the majority of people don’t realise that idling is illegal just highlights the scale of the problem,” said Matt Shirley, senior manager, electrification & new mobility. “Every minute a car is idling it produces enough emissions to fill 150 balloons. It goes without saying, if the 27% of school run journeys stop idling, there would be a significant improvement in the air quality for their children.”

To draw attention to the facts behind engine idling and the pollution it causes, Renault has created a new film that underpins its education campaign and asks drivers to ‘Be Mindful, Don’t Idle’.

Matt Shirley explained: “This is not about demonising the school run, our study underlines the importance, even more so since lockdown, of the car. We just want parents and guardians to be mindful of the detrimental impact of idling, and to alter their behaviours for their own children and those around them.”

To see Renault’s film on the latest research and campaign, click here.