Ford has given the Edge SUV an overhaul for Europe, with refreshed styling and a new line-up of diesel engines including the first with front-wheel drive. 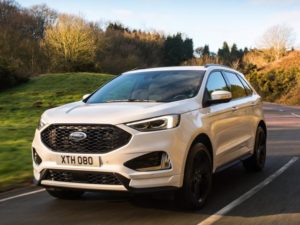 This replaces the entire engine line-up, introducing a 148bhp version with front-wheel drive, and 188bhp or 235bhp units with four-wheel drive. All feature an automatic transmission, with six ratios on the 188bhp engine, and the new eight-speed auto on the other two, featuring a rotary gear selector and software which can anticipate gradients, bends and smooth shifts to suit.

The trim line-up has also been expanded, with a new entry-level Trend model alongside the Titanium, ST-Line and Vignale versions. It also gains assistance technologies including post-collision braking, evasive steering to avoid accidents, and adaptive cruise control with full traffic jam support and lane centring.

Styling upgades include a larger, trim-specific grille and standard-fit LED headlights and tail lights, with a redesigned interior including a new centre console and digital instrument cluster. Fuel economy and pricing details will be announced later this year.