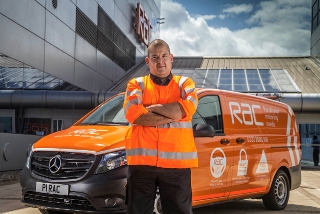 The 37-year-old from Manchester, runner-up in last year’s RAC Patrol Ambassador of the Year competition, fought off nearly 1,500 colleagues from all over the UK to win the top prize this time around. The decision was based on factors such as productivity, roadside ‘fix’ rates, and customer satisfaction.

He will be taking part in the new Vito 116 Long which bears the personalised registration plate, P1 RAC, and which was the first right hand model to roll off the Mercedes production line. It is powered by a 163hp BlueTEC engine – the first in its class to meet the latest Euro 6 emissions standards– matched to a seven-speed 7G-Tronic Plus gearbox.

To maximise fuel economy, the all rear-wheel drive Vito is fitted with a number of BlueEfficiency features, including an alternator management system that allows the battery to charge during coasting or braking, fuel-efficient tyres and an ECO start/stop function.

Ben Wilson said: “I’m really looking forward to taking part in the 2015 MPG Marathon and seeing what we can do in the Vito. It’s a great opportunity to use this as a benchmarking exercise for fuel efficiency which can be applied to the rest of the RAC patrol fleet, so it is really useful operationally for us.”

Wilson will be supported by his colleagues from the RAC refuelling patrol team who will be on-hand around the course to ensure participants keep on the move and that they are operating within the rules of the challenge.

Jenny Powley, sales director corporate at RAC Business, added: “This is another great opportunity for Ben after being crowned patrol of the year and RAC Business is also pleased to be sponsoring the event once again. At RAC Business we understand how important it is for fleets to run efficient vehicles to keep down costs, and managing fuel costs is a major part of that.”

Event organiser, Jerry Ramsdale, publishing director of Fleet World, said: “We are thrilled that, Ben Wilson, Patrol of the Year at our co-sponsors, the RAC, is entering this year’s MPG Marathon.

“It will be fascinating to see how Ben fares in the same Vito van that he uses for his everyday patrol duties, and we wish him the very best of luck.”

This year’s Marathon, which challenges drivers to complete a 300-mile course under normal driving conditions using as little fuel as possible, has as its headline sponsor Barclaycard Fuel+ in association with TMC, for the first time.

Jerry Ramsdale added that entries were now coming in at a steady rate for this year’s eco-skills driving event, and that Ford, Peugeot, Renault, Citroen, Honda, Mazda, Kia and Jaguar were amongst manufacturers who had confirmed that would be entering their very latest models.

“We are talking with several others and expect to be announcing further entries soon. Watch this space,” he said.

Also co-sponsored by ALD Automotive and TRACKER, this year’s MPG Marathon allows competitors to find the most efficient route between set checkpoints, reprising the approach that was first introduced two years ago.

There are eight main classes of passenger cars in this year’s MPG Marathon, restricted to a maximum carbon ceiling of 190g/km, including hybrid, range extender and fully electric vehicles, plus five main classes of vans up to 3,500kg gross vehicle weight.

For more details of the MPG Marathonplease phone 01727 739160, or visit the event website at http://www.thempgmarathon.co.uk/