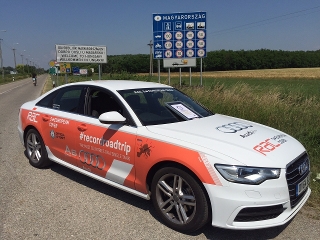 The #RecordRoadTrip began in Maastricht at 9.48am (GMT) on Tuesday 9 June and ended in Hungary at 12.44pm (GMT) on Wednesday 10 June with the pair averaging 75.9 miles to the gallon in the A6 ultra, with its seven-speed S tronic transmission and 73-litre fuel tank.

The route was mapped by the RAC, which has more than 100 years’ experience of providing European breakdown cover for members, to avoid the mpg-sapping effects of built-up, congested towns, cities and mountains.

Roadside assistance was provided by the RAC’s new Patrol Ambassador of the Year, Ben Wilson from Manchester, who followed the record-attempt car all the way from the Netherlands to the point the title attempt ended, just before completely running out of fuel in Hungary.

“By covering so much of Europe on a single fill-up, we have proven that real-world economy of almost 76mpg or more can be had from the latest engine technology,” commented Jon Zammett, head of Audi UK public relations. “The Audi A6 TDI ultra has proven the range capability of one of the world's most advanced executive cars."